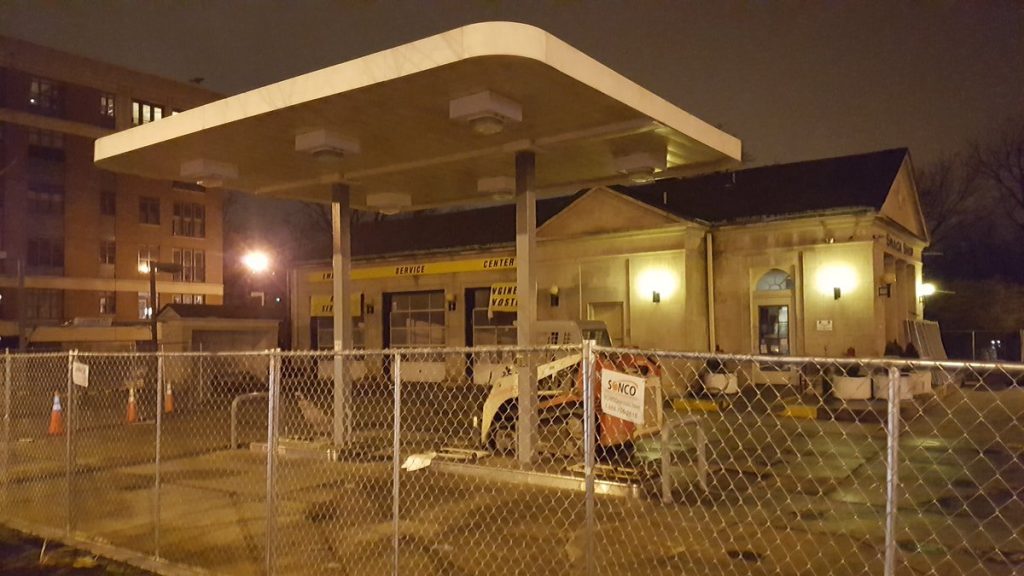 From the Westpark Tenant Association:

“Here’s the story so far:

At the end of November, DC’s Historic Planning Office (HPO) issued its recommendation to the Preservation Review Board (HPRB) to decline Marx Realty’s plan to convert the landmarked service station into a MUD. The extant structure would have been relocated on the site and become some form of retail. (The Fine Arts Commission had previously given its approval.)

December 6, Marx tells the Sunoco to get out.

Yesterday (Tuesday 1/3) it’s emptied out and fence up. I haven’t been over there yet today to see what kind of progress has been made. A neighbor sent a video from this morning showing the canopies over the former pumps being demolished.

I spoke with the station owner and he as pretty upset. He said the word was this was retaliation for the community opposition winning out. “Let them look at holes in the ground.” He speculated that if remediation is not required, the land will be back on the market: With a non-functioning service station.

The scuttlebutt after Marx withdrew their presentation from the December HPRB hearing, they were on the warpath and out for blood. This is clearly a giant “F* You!” to the residents of the neighborhood who successfully opposed the project. The DC Dept of Energy has still not responded to the ANC’s inquiry regarding the Gas Station Advisory Board, which by law must approve closure of any full-service station (but does not exist so it cannot issue a ruling). There is some loophole allowing closure if there is another full service station within 1 mile. Supposedly the station at Wisconsin & Q meets that criteria. Whether this is actually legal or not doesn’t matter. Embassy is out who knows how long this will drag on. The intent is without question to force the neighborhood to capitulate. Why Marx would literally throw away the $400K of annual rent and property taxes the Sunoco was paying makes no sense.

This is likely to get even uglier.