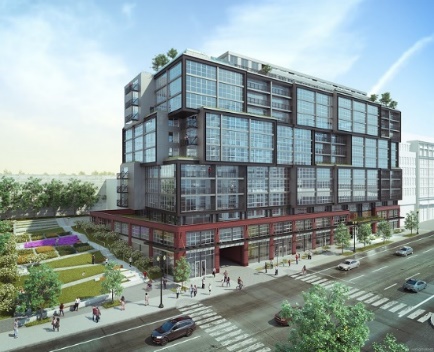 “Federal Capital Partners® (FCP) has entered into a joint venture with Level 2 Development, LLC and Clark Enterprises, Inc. to develop The Highline, a $100 million apartment community at 320 Florida Avenue, NE in Washington, DC. The community will be comprised of 318 luxury apartment homes including four penthouse units and approximately 10,000 square feet of first floor retail space.

“The Highline is an exciting opportunity in one of the most vibrant and exciting submarkets of Washington, DC,” said Wade Casstevens, FCP Senior Vice President. “We are particularly pleased to be developing this extraordinary project with Level 2 Development and Clark Enterprises, both strong local companies who have done an exceptional job of designing and planning The Highline over the last few years.” Level 2 and FCP recently completed Takoma Central, comprised of 150 premium apartment units above Busboys & Poets and next to the Takoma Metro Station in Takoma, Washington, DC.

Designed by Eric Colbert & Associates, the 12-story, modern-industrial architectural design integrates warehouse-style windows with industrial-framed glass cubes that weave in and out of the Florida Avenue façade at varying depths. The project was inspired by New York’s meatpacking district and the elevated park known as the High Line. Other unique elements of the design include materials reminiscent of rail cars, and steel columns that echo the riveted steel supports of the nearby railroad underpass. Located one block from the NoMa/Gallaudet Red Line Metro Station, The Highline at Union Market will provide a significant pedestrian connection between the NoMa and Union Market neighborhoods through a park it will build adjacent to the project. “This project embraces the history of the Union Market District as well as the railway, while setting a new standard of design for the area”, said David Franco, a principal at Level 2 Development. “We are looking forward to working again with FCP on the project.”

The Highline will include a rooftop pool as well as sustainable features equivalent to LEED Silver, including a green roof, bio retention facility, energy-efficient building design and 105 bicycle parking spaces. The Highline will offer its residents and retail businesses extraordinary access to nearby amenities including the dozens of retailers and restaurants at Union Market, now one of Washington, DC’s top destinations, the vibrant NoMa business district, Gallaudet University, the NoMa/Gallaudet Metro Station and Union Station.