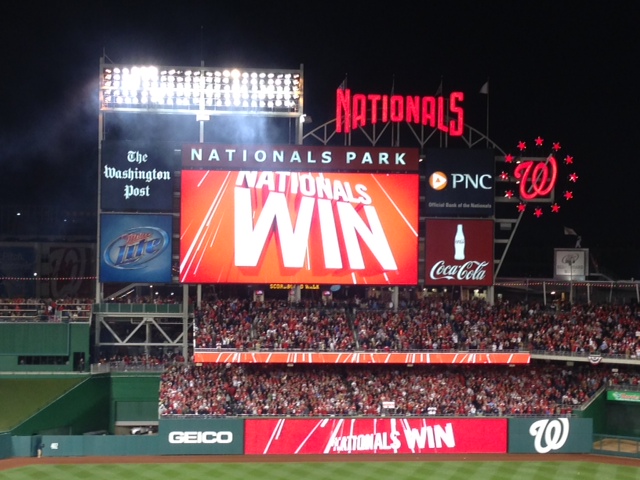 Praying we see this tonight

“Due to the decision by WMATA General Manager Paul Wiedefeld to keep Metro closed at its regular time tonight, the District of Columbia is stepping up to provide alternative transit options in preparation for game five of the National League Division Series between the Washington Nationals and the Los Angeles Dodgers and encouraging creative, resilient Nationals fans* to plan ahead for their return trips.

Below are transportation options from Nationals Park.

The DC Circulator will offer Special Service Thursday, October 13, on the Union Station-Navy Yard route. Service ends at 1 am.

DC Circulator provides an alternative to taking the Metrorail Green Line to and from the ballpark and connects with Metrorail’s Red Line, MARC, Amtrak, and Intercity Buses at Union Station and Metrorail’s Orange, Blue and Silver lines at Eastern Market station. For more information, visit DC Circulator.

Capital Bikeshare Corral Service will be available at the 1st Street and N Street, SE, station. The service will begin one hour before game time and conclude 30 minutes after the game is over.

The nearest Capital Bikeshare stations to the stadium are located at the following:

Bike Stations
There are more than 250 bike racks around the ballpark and Nationals Park offers a free bike valet located in Garage C at the corner of N Street, SE and 1st Street, SE. The valet will be accepting bikes two hours before game time and will close one hour after the game is over.

For-Hire Vehicle/Ridesharing (e.g. Uber and Lyft) Drop Off and Pick Up

Metrorail/Metrobuses
Take the Green Line to the Navy Yard Station, which is half a block away from the ballpark. There are three main transfer stations to the Green Line: Gallery Place/Chinatown, L’Enfant Plaza and Fort Totten. Orange, Blue and Silver Line customers may take these trains to Eastern Market and transfer to the DC Circulator Navy Yard route for an additional $0.50. Alternatively, Orange, Blue and Silver Line customers can walk to National Park from the Capital South station, a distance of approximately 8/10 of a mile.

Metrorail users should note that the last trains from the Navy Yard Station are 11:39 pm northbound and 12:17 am southbound.

The V4 and P6 Metrobus routes serve the ballpark outside of rush hour. For more information, visit wmata.com.

Driving/Parking
Fans who plan to drive to the game are encouraged to carpool and to visit the Nationals’ website for information about parking lots. Heavy traffic and delays are expected around the ballpark and on busy routes such as I-295, I-695, I-395, and the Southeast/Southwest Freeway. Construction on the Capitol Crossing Project in the Third Street Tunnel will cause some delays. Drivers can also expect significant congestion at the intersection of South Capitol and M Streets, SE.

The following streets adjacent to the ballpark will be closed three hours before the start of each home game and may remain closed up to three hours after a game ends:

The District Department of Transportation (DDOT) will deploy additional staff and extend operations. DDOT will mobilize its Traffic Management Center to monitor traffic flow around the ballpark. Traffic signal technicians will be on duty to adjust signals as necessary to ease congestion. More than 40 Traffic Control Officers and Safety Technicians will be deployed at key intersections before and after the game, and additional signage will direct fans to Taxi stands and Vehicle for Hire locations.

Half Street, SE will be made one way southbound between L Street and M Street

No left turn at 1st and M streets

No left turn at New Jersey and M streets

Fans are reminded to drive with caution in the area and to follow the directions of traffic officers.

Motorists are also reminded to pay close attention to the parking signs, particularly on residential streets in the neighborhoods around the ballpark. On many blocks, parking is reserved for residents only on one side of the street, and limited to two-hour parking for non-residents on the other side. Parking will be enforced and baseball fans are asked to avoid parking in the neighborhoods.”