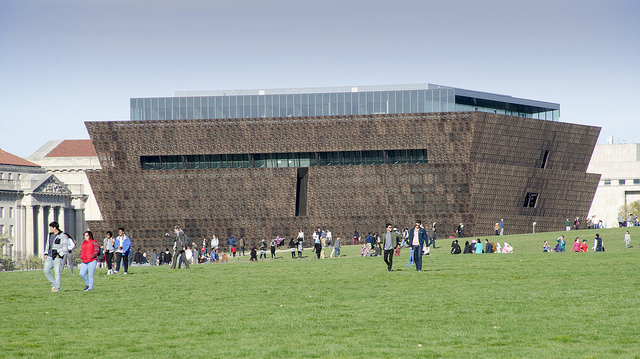 “Mayor Muriel Bowser announces events, road closures and security measures related to the grand opening of the National Museum of African American History and Culture, the 19th and newest museum of the Smithsonian Institution.

In honor of the museum opening, Mayor Bowser will attend the dedication ceremony and grand opening on Saturday, September 24. In addition to several events that will be hosted throughout the District to commemorate the opening, the museum will also host Freedom Sounds: A Community Celebration, a three-day free festival taking place on the Washington Monument grounds. The event will include musical performances, spoken word, oral-history activities, storytelling and interactive workshops. The festival will also include concert performances on Saturday from Living Colour, Public Enemy and The Roots. On Sunday, Experience Unlimited, Meshell Ndegeocello and Angelique Kidjo will deliver concert performances. A full schedule will be available on the museum’s website (www.nmaahc.si.edu).

“I know I’m not alone when saying I am so happy this day has finally come. We finally have a museum that highlights an American story and journey looking through the lens of African-Americans,” said Mayor Bowser. “Washington, DC has been witness to some of the most important moments in African-American history.”

Nearly 100,000 people have become charter members of the museum. The attention and popularity of the new museum is expected to boost visitors to the District by at least an additional 4,000,000 per year. Mayor Bowser has coordinated the following updates and closures with DDOT and Metropolitan Police Department (MPD) to keep traffic moving during the grand opening activities on September 24 and 25. Traffic control officers and safety technicians will be deployed at key intersections around the museum to support pedestrian and vehicular traffic for the dedication ceremony and opening of the facility. DDOT’s traffic management center will monitor conditions and deploy staff to congested areas as needed. Traffic signals will be adjusted in real time to assist traffic flow.

Additionally, the District will activate the Emergency Operations Center (EOC) on September 24 from 5:00 am to 11:00 pm in support of the dedication and associated events. The EOC will serve as the National Capital Region Multi-Agency Coordination Center, including the Joint Information Center in conjunction with the United States Park Police and the National Park Service in a unified effort with our District, local and federal partners.

We urge attendees to consider public transportation this weekend. All visitors to the National Mall are encouraged to use Metro and the nearest stops to the museum are Smithsonian and Federal Triangle (Orange, Blue and Silver Lines). At this time, Metro’s SafeTrack project is not expected to have an impact on this event. For the most current information about Metro, visit www.wmata.com.

The DC Circulator will offer a special modified service on its National Mall route between 7:00 am and 2:00 pm to accommodate attendees. Due to road closures on Jefferson Drive NW and Madison Drive NW, the route will be modified to provide more direct service along Independence Avenue SW. The closest stop to the festivities will be on 12th Street SW and Independence Avenue SW, directly across from the Smithsonian Metro Station exit.

The National Mall route will serve only the museum loop after 2:00 pm on Saturday and all day Sunday because of road closures.

In addition, due to these street closures, there will be no public or bus parking near the museum for the dedication ceremony.”