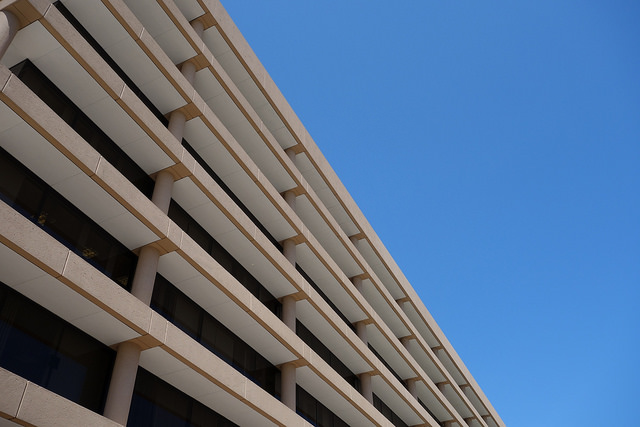 “Metro GM/CEO Paul J. Wiedefeld announced that a valuation analysis of the Jackson Graham Building, Metro’s downtown D.C. Headquarters, has been done. The findings are that the building is valued between $56 million and $132, depending on what density a rezone of the property would allow.

The report includes a range of current market values for the property and identifies various scenarios that maximize its worth—from a baseline scenario of renovating the existing structure (which renders the lower end of the value range, at $56 million), to demolition and redevelopment from the ground up for future commercial uses (the highest likely value estimated at $132 million).

Adjacent to the Verizon Center and proximate to two Metrorail stations, the sale of the 600 Fifth Street, NW site is prime for a top-of-the-market commercial or residential development. However, current zoning has Metro as the only permitted use of the site. If Metro were to stay in the building, it would need to expend an estimated $75 million to $90 million to replace almost every major building system (plumbing, heating and air conditioning, electrical, fire/life safety), all of which are at the end of their useful life.

”The choices facing Metro about its headquarters building are clear: either expend millions to retrofit the existing building to bring it up to modern fire and life safety standards, or sell the building at the top of its potential value range and use those proceeds to fund a relocation,” said Wiedefeld.

To optimize the value, Metro will be seeking rezoning to allow for a high-density commercial redevelopment, which is consistent with the District of Columbia’s Comprehensive Plan. Following the rezoning process, Wiedefeld will reassess Metro’s market position and make a determination about whether or not to move forward with the sale of the Headquarters facility.”

Read more →
More Stories
Photos from PoPville – Bird and Bloom“any experience with adding an in ground pool to their yard in DC?”