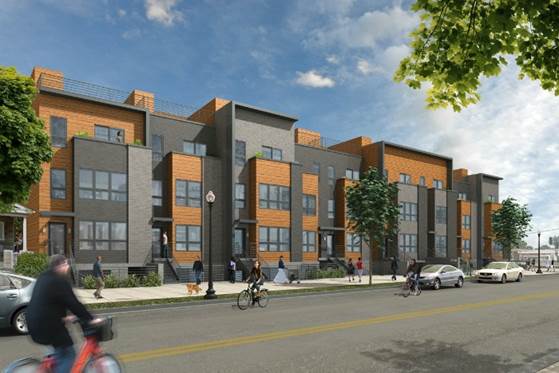 Last November, I saw a posting on your blog for new townhome style condos in Brookland being developed by Lock7. Shortly after, I took a trip to the Brooks Row construction site and visited Urban Pace’s sales office. By the end of the month, I had a ratified contract. One of the conditions was for my then-current condo to be under contract to be sold by Feb. 15th (this was later pushed back to March 30th).

At the time, I was told construction would be completed “late March/early April,” which was consistent with your blog post: “…scheduled to deliver early next spring.” The major snow storms we had pushed completion until “mid-May.” On April 17th, they hosted an open house for only one of the 22 units. That day, purchasers were still being told the project would be completed by “mid-May,” despite the fact that even the home that was “finished” was in reality very far off from being done. Two days later, my realtor told me he heard form Urban Pace and construction was then pushed back to “early June.”

On May 20, after weeks of privately expressing concerns about the construction progress with my realtor, I finally emailed Urban Pace looking for answers as to why every time I went to the site it appeared as though nothing was being accomplished. In that email, I explained to Urban Pace that I had to be out of my condo (it was under contract) by June 30. They then blamed the record amounts of rain we received as an excuse. Early that month, my realtor and I toured my unit. At that time the target for completion was “end of July/early August.”

On July 1, I moved into a temporary apartment with my dog (Lock7 is subsidizing less than a quarter of the rent costs). That weekend, frustrated with the move and the living situation, I sent another email to Urban Pace. On July 5, the response was, “With regards to construction Lock 7 told me today it would be complete end of the month, potentially early August. We need C of O after that, so settlements hopefully should take place in August once we have the final permits.”

On August 18, Lock7 sent a formal letter to the purchasers. In part, the letter states: “…the project is not as far along as we had hoped it would be by this date. At this point, it will not be possible to schedule walk-throughs until early next month. In addition, while we cannot commit to a firm date yet, we do not anticipate being able to settle units until at least the end of September. I would encourage you to secure housing through the month of September and until further notice.

“We feel terrible about these delays and we apologize for any issues they have caused you with planning and scheduling your move-in. While construction delays are common, we truly felt that we could meet the early summer delivery date. The general contractor had been showing us projections for completion that matched this timeline and we didn’t realize how far behind the progress was at the project until earlier this summer. We’ve been pushing ever since to do everything in our power to get this project to the finish line.”

At this point, based on their last letter, they will be at least five months behind schedule. From my perspective, either Lock7 and Urban Pace are incompetent, lying, or both. I have gone by the construction site on average of twice a week since the spring. Sometimes work is being done; sometimes it isn’t. I have raised alarms about this at every opportunity. I have asked for my emails to be forwarded to Lock7. I have given my business card to supervisors at the site asking for someone to call me. No one from Lock7 has ever contacted me. I do not believe a company that is waiting on the sizable profits from the sale of 22 half-million dollar homes would not be on top of the progress, especially considering how significantly delayed this project is.

I have no leverage. If I walk away, I risk the EMD and a home I have been excited about moving into for nearly a year in a neighborhood I want to live in. The only option I see now is to let others in the community know about this situation in hopes of raising awareness about these companies and how they have handled the situation and dealing with a customer.”