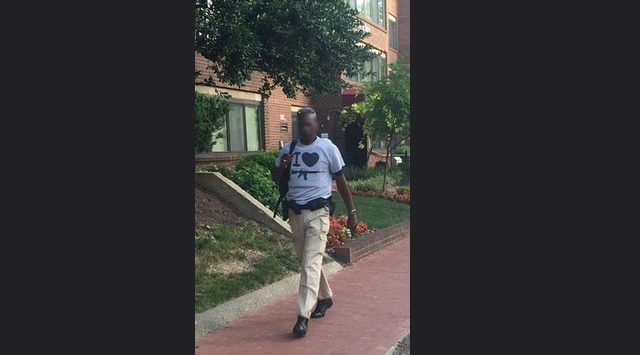 Given the current climate, probably best to leave this shirt at home when off duty and wearing fatigues and gear and such. In case you missed the excitement Friday (we tweeted the situation @PoPville and on Facebook here. Thanks to all who sent updates.) night a reader sums it up:

“GW pushed out a campus emergency alert about a man spotted at 24th and Penn with an M16, body armor and a t-shirt reading “I love machine gun” (sic).

MPD & GWPD investigating a black man, 5’9″, white t-shirt seen near campus believed to be in possession of an M16. pic.twitter.com/YG0zLKv3zU

About 40 minutes later, they gave the all clear, saying the suspect was in custody:

ALL CLEAR. Suspect in custody of DC MPD.

Then MPD tweeted the kicker: “No arrest. Person of Interest was an off duty Special Police Officer.”

All clear at I St. and N.H. Ave, NW. No arrest. Person of Interest was an off duty Special Police Officer.