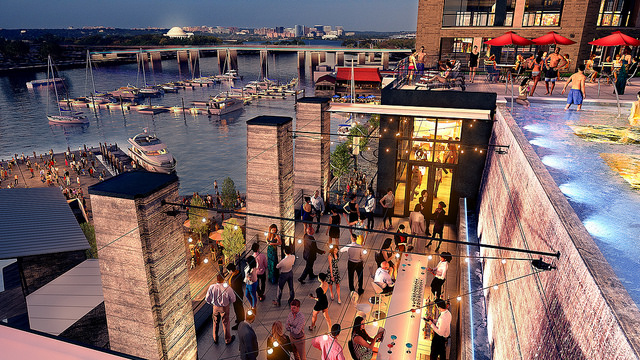 “The following is an updated list of restaurant and retail offerings coming to The Wharf in 2017, as part of the development’s Phase I grand opening:

Social Restaurant Group’s 9,800-square-foot concept La Vie, their largest venture to-date, will feature French-Mediterranean cuisine that includes an extensive moules-frites menu, a wide selection of sweet and savory tartines and a variety of coastal-inspired beverages. Situated along The Wharf’s most expansive and stunning vistas, their space boasts a 1,100-square-foot waterfront terrace, and serves the resident pool deck above. La Vie also includes private access to a 5,000-square-foot rooftop terrace, poised to be Washington’s premier events space.

District Hardware and Bike, the nearly 50-year old family-owned hardware store, full-service bike shop and now café and water sport retailer, is expanding from its current location in Foggy Bottom. Their new 6,300-square-foot location will be designed by Natalie Park Design Studio and is the latest in a series of expansions for the store, which has been owned and run by the Conway family for three generations. To strengthen the concept, District Hardware and Bike has teamed up with local coffee roaster, Vigilante Coffee, to help design and launch the new café and coffee bar.

Cordial Craft Wine, Beer & Spirits by Eric Rohleder is expanding from its current operation in Union Market. His 525-square-foot location at The Wharf will feature a water view and products from independent importers and boutique distributors across the globe.

America’s largest pharmacy retailer CVS will occupy a 9,000-square-foot space at The Wharf.

Earlier this year, The Wharf announced the first round of restaurant concepts:

Fabio Trabocchi, a James Beard Award-winning chef, leads The Wharf’s restaurant line-up. Having received numerous international honors, Fabio’s use of fresh seafood brilliantly combined with quality ingredients will come to life at Del Mar in a menu that pays homage to the seaside town of Mallorca. Fabio’s two-level waterfront Spanish and seafood restaurant at The Wharf is destined to become a standout in the DC restaurant scene.

Mike Isabella and Top Chef Finalist Jennifer Carrol are collaborating at Requin – their restaurant on the edge of District Pier—bringing the Mediterranean coast of France to The Wharf. The riverside restaurant will have an extensive European wine menu and a social-centric sharing menu. The restaurant’s indoor-outdoor setting will have expansive waterfront views.

Jamie Leeds is one of Washington’s most highly recognized chefs. Jamie is reinventing her famed Hank’s Oyster Bar for The Wharf. Hank’s On The Water will be known for its simple, approachable seafood menu, consisting of “urban beach food” in small and large plates for sharing—in an incomparable waterfront setting along 7th Street Park and Wharf Street.

Todd Thrasher has a true talent for mixing ingredients and turning them into unforgettable cocktails. At The Wharf, Todd’s passion and creativity will come to life at the Potomac Distilling Company. His waterfront commercial rum distillery and two-story tavern will feature some of the best hand-crafted cocktails anywhere along the East Coast.

Since 1899, the Croxton family has farmed oysters from Virginia’s Rappahannock River. Cousins Travis and Ryan are fourth generation Croxtons carrying on the family’s oystering legacy with Rappahannock Oyster Bar. They are widely recognized as passionate and inspiring restaurateurs known for “good food—grown well.” Their Rappahannock Oyster Bar will occupy the restored historic oyster shed (circa 1912) building at the Municipal Fish Market—a truly fitting location for a family business that has been in operation for more than a century.

After working for Guinness for more than nine years, Ireland native Mark Kirwan is creating an authentic Irish Pub that will honor the rich Irish heritage of the Southwest Waterfront. Kirwan’s waterfront pub will be reminiscent of the Irish charm and hospitality of Mark’s beloved homeland. The waterfront bar and traditionalist Irish menu is the heart and soul of Kirwan’s. Live Irish music will complement the convivial scene.

The team behind DC’s original dock bar, Cantina Marina will continue to be a District Institution at The Wharf—a wonderful addition of live music, great libations and bar food on the waterfront.

Casey Patten is adding Taylor Gourmet and its hand-crafted, Philly-style hoagies to District Square. Casey’s commitment to “make you the best damn sandwich in the District” is one of the reasons that Taylor Gourmet has become a perennial DC favorite and will create a new fan base at The Wharf.

Dolcezza Gelato will also open up shop at The Wharf, featuring old-world gelato and carefully crafted coffee at a waterfront café on Wharf Street, featuring locally sourced ingredients. Husband and wife team Rob Duncan and Violeta Edelman will be expanding Dolcezza Gelato’s artisanal offerings with hand crafted sweets, savories on the menu, and beer and wine.

Negotiations continue with great chefs, food purveyors and retailers to complete the remaining restaurant and quick service food spaces at The Wharf.”

3630 Georgia Avenue, NW. Tsehay Ethiopian opened here in June 2019 Ed. Note: I’m hearing their new home will either be in Navy Yard or NoMa – will update when…