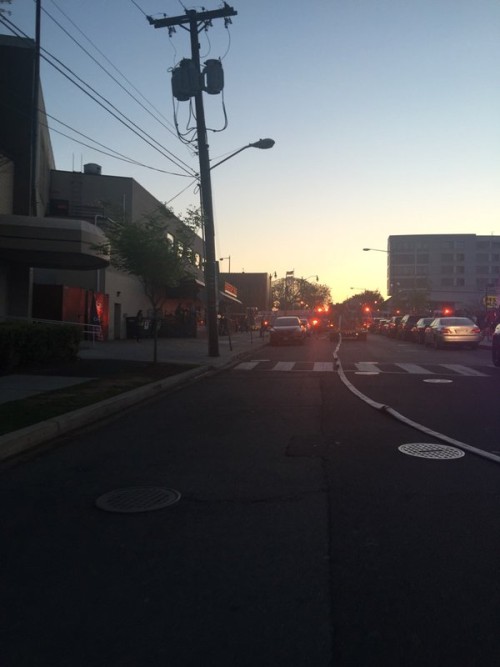 Photo sent to us Saturday night by charosb

“The investigation into the cause of a Saturday evening smoke incident outside Friendship Heights Station is ongoing. While Metro has not yet identified the root cause of the incident, investigators have eliminated power cables as a contributing factor.

As a preliminary matter, the investigation is focusing on a foreign object, specifically a metal part of a railcar, becoming dislodged and making contact with the electrified third rail. The foreign contact is believed to have caused a loud noise, flash and smoke.

Investigators have conducted inspections of all power infrastructure in the tunnel, as well as all cars of the incident train, to reach this preliminary conclusion.

At approximately 7:19 p.m., Saturday, April 23, the operator of Red Line train #107 traveling outbound reported hearing a loud boom and smoke entering the lead car.
The train consisted of eight cars: four 5000-series and four 1000-series.
The train stopped in the tunnel prior to Friendship Heights Station.
Passengers were moved into the trailing cars of the train.
The train operator was instructed to reverse direction and was given permission to move back to Tenleytown Station, where the train was offloaded.
Prior to the train being moved, an unknown passenger pulled an emergency door release, causing the train to lose “all doors closed” indication. It was confirmed that no passengers “self evacuated” from the train. Once all doors were confirmed closed, the train was moved.
There were no injuries.

Metro and the Federal Transit Administration continue to investigate the cause of this incident. Updates will be provided as information is developed.”