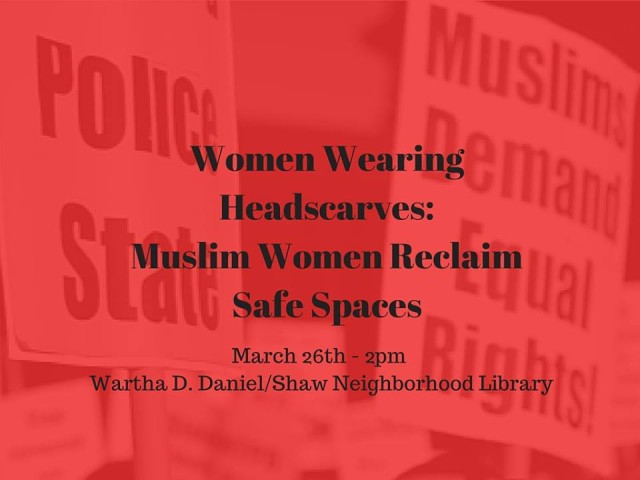 “Collective Action for Safe Spaces (CASS) and Muslim American Women’s Policy Forum (MAWPF) invite you to join us at the Watha T. Daniel/Shaw Library on Saturday, March 26th at 2pm for Women Wearing Headscarves, an event to reclaim safe public spaces for everyone, especially Muslim communities experiencing Islamophobia in the District.

On the afternoon of Wednesday, March 23rd, CASS Executive Director Jessica Raven witnessed a horrifying act of discrimination and abuse of power by a DC Public Library officer. The officer harassed a woman who was quietly reading in the Shaw Library and intimidated the woman with handcuffs for refusing to remove her hijab. He told the woman to remove the hijab or leave the library.

Our collective organizations have released this public statement calling on the DC Public Library and other public institutions to address Islamophobia through a public information campaign and improved staff training. We are also calling on DC Council to convene a listening session that invites Muslim communities, which includes all various ethnicities and racial groups, to discuss their experiences with discrimination, bias, racism, and Islamophobia in the District.

We are disappointed that the DC Public Library has minimized this problem as “an isolated incident,” disregarding the context of growing Islamophobia nationwide. We urge the DC Public Library and other public institutions to adopt proactive solutions to prevent future incidents of harassment and discrimination.

Read more →
More Stories
“Anyone Else Get a ‘Notice of Correction’ for DC Income Taxes”?The Pug – Always Gracious to All