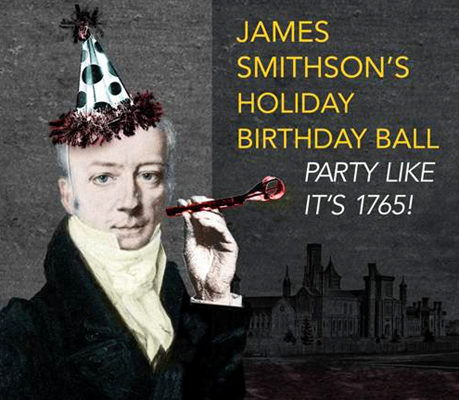 When it came to gift-giving, James Smithson was a champ. On his death in 1829, the English chemist and mineralogist left his sizeable fortune to the United States—a place he’d never visited—to found “an establishment for the increase and diffusion of knowledge” called the Smithsonian Institution.

Now, on the 250th anniversary of his birth*, it’s time to give him a big thank-you by gathering in the original Smithsonian building, the historic Castle, for a birthday bash inspired by James, his era, and the Smithsonian itself.

It’s going to be a terrific party:

Since there are now about 137 million objects in his collections, Mr. Smithson doesn’t need any gifts. But in the spirit of his generosity, SMITHSONIAN at 8 has partnered with local charity Martha’s Table to help needy families and children this holiday season. Guests may bring their donations with them to the event, and we’ll deliver them to Martha’s Table. For a list of winter clothing needs, click here.

SPECIAL FEATURES FOR VIP TICKET-HOLDERS: Exclusive early access to the event from 7 to 8 p.m., including an open bar featuring beer, wine, and specialty cocktails and small bites. (Please note that these VIP benefits are available only between 7 and 8 p.m.)

*No one knows the exact date of James Smithson’s birth. His unmarried mom slipped across the Channel to Paris for his birth.

If tickets are available at the door, prices will increase to $30 for General Admission and $60 for VIP Admission.

All ticket sales are final. No refunds or exchanges.

Must be 21 years old with valid photo ID to attend.

For tickets and further information the public may call 202-633-3030 or visit www.SMITHSONIANat8.com

Inspired by the world of the Smithsonian, the SMITHSONIAN at 8 event series offers one-of-a-kind experiences for guests 21+. With themes from the local to the global, these after-hours gatherings combine music, food and drink, and unique settings to create evenings that are smart, adventurous, and memorably entertaining. #SMITHSONIANat8 curates your fun!”