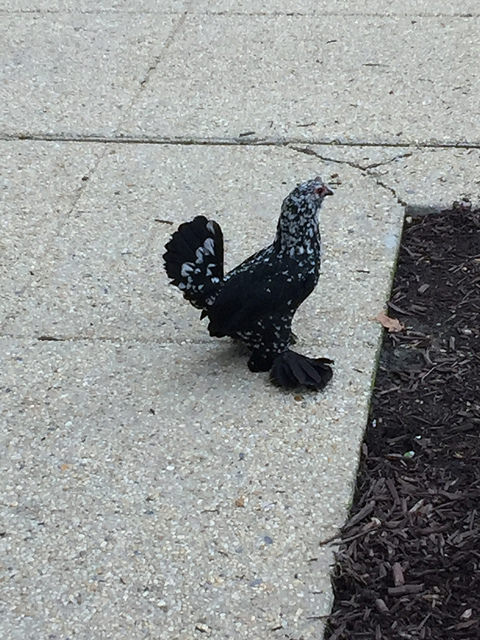 It is no secret that we at PoPville are quite fond of street chickens. So it was with great joy that I received the following email late yesterday afternoon:

“NPR found a chicken this morning. It is now sleeping quietly in the office of our former International Editor. It’s a hell of a story. If you’re interested, please follow up.”

Sweeter words were never read. So follow up I did. Following is the story of the NPR street chicken. 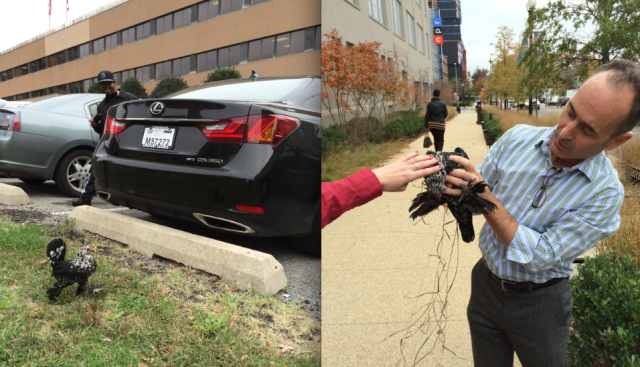 Many thanks to Adam Cole who filled in the details:

Yesterday, I glanced out the window and saw a decidedly fancy chicken strutting around on the grass in front of the DC Housing Department. It had attracted the attention of several NPR employees, including music librarian Robert Goldstein and the head of our health blog, Scott Hensley. I headed downstairs to get a closer look. A passerby (in pic 02, NY hat) was alternatively fascinated with and terrified of the bird. “What is that thing?” he asked repeatedly.

Foreign affairs correspondent Jackie Northam arrived on the scene expressing concern for the chicken’s safety. We bystanders resolved to catch the chicken and protect it from the morning North Capitol traffic. Ten embarrassing minutes later, I had grass stains on my knees and the chicken had given in to stereotypes and crossed the road.

Enter Jason Beaubien, chicken owner and neighborhood hero. Hardened by years of covering coup attempts in the Ivory Coast and Mexico’s drug war, Jason rallied us all to corner the chicken in a tuft of ornamental grass where he was finally able to grab it. The chicken sensed Jason’s quite power and calmed down immediately. It is now resting in the vacated office of our former international editor (now executive editor of news), Edith Chapin, inside a converted mail bin.

The authorities let us know they’d have to dispose of the chicken somehow (apparently rogue poultry are not allowed in our nation’s capitol? I’m not really clear on that point – maybe they’d just take it out to a shelter somewhere) so it would be fine for Jason to take the chicken back to his farm tonight. That’s the current plan. I’m sure he would be happy to reunite the chicken with its owner if such a person came forward.” 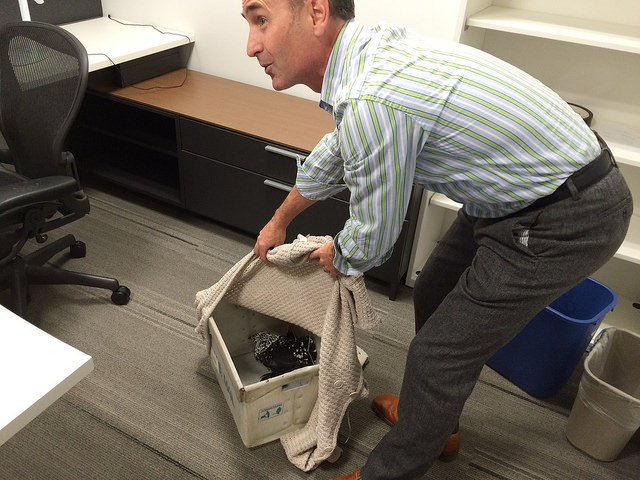 And because it’s 2015 – you can follow the NPR Street Chicken on twitter here. And because it’s NPR, read about chickens in the third worldhere. If you encounter a street chicken around town please send a photo and your story to [email protected]