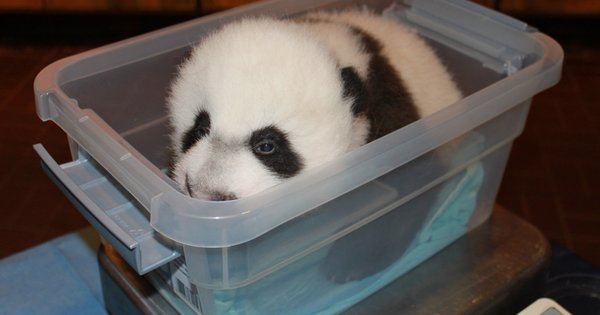 “This panda update was written by keeper Nicole MacCorkle.

When last weighed on Friday October 30, Bei Bei was 9.5 pounds! Since he is growing so rapidly, we know for certain that he is getting enough to eat. However, Bei Bei still occasionally fusses after he nurses. It is possible that Mei Xiang, like many mammal mothers, occasionally ends the nursing session before Bei Bei is ready. That causes him to vocalize, to voice his displeasure.

We’ve also seen Bei Bei get hiccups more than previous cubs, though it isn’t a cause for concern. It is possible that he is suckling with such enthusiasm that he is taking in a lot more air than his older siblings, causing the hiccups. Unlike our moms probably did when we were young, Mei Xiang does not burp Bei Bei. The hiccups usually subside naturally after a short time.

Bei Bei continues to make attempts at crawling and walking. He spends a lot of time scooting around in circles, resting briefly, then resuming his efforts. It sort of looks like he’s swimming in the den. Judging by milestones hit by past cubs, we hope to see Bei Bei taking his first steps by the end of November.

Like brother, like sister… Bao Bao, as her older brother Tai Shan before her, has a bit of a reputation in the panda house for consistently being extremely messy. (Giant pandas can be quite messy eaters.) So it seems like most days when the keepers arrive, Bao Bao has trashed her room.

Soon, the pandas will switch from eating a mixture of bamboo leaves and culm (the woody central stalk of the plant) to almost exclusively culm. In the summer and fall, photosynthesis stores sugar and protein in the bamboo leaves, so giant pandas opt for the nutrient-rich leaves. However, in the winter and spring, when bamboo produces shoots, nutrients are stored in the culm, so giant pandas favor the protein-packed stalk. The switch in diets makes all of the panda enclosures, both indoor and outdoor, much more time consuming to clean. Keepers will be cleaning up bamboo “shreds” for about an extra hour or two each day in the not-so-distant future.

Additionally, Bao Bao received a special enrichment treat this week: a pumpkin! She had no trouble sinking her teeth into the squash and rolling it around her enclosure. Enrichment like this is vital to providing a stimulating environment for Bao Bao. A pumpkin is a novel object that challenges her to use her teeth and claws naturally and enhances her well-being.”