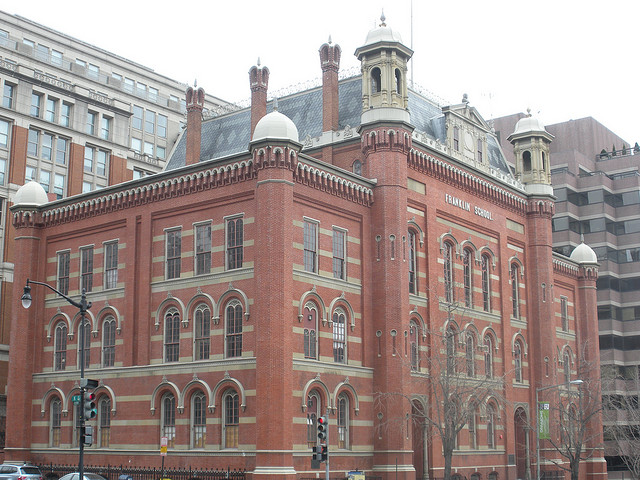 “Mayor Muriel Bowser and Deputy Mayor for Planning and Economic Development Brian Kenner announced today that the District received four responses to the Request for Proposals (RFP) for development of the former Franklin School in Ward 2. All four teams possess extensive commercial-development expertise in the District, which will ensure a competitive review process for selection of the site’s developer. Earlier this year, the Bowser Administration reissued the RFP process after canceling tentative plans by a developer to use the property as a contemporary art space.

“I am pleased with the submissions the District received for the restoration of the historic Franklin School,” said Mayor Bowser. “In reissuing the RFP, my goal was to facilitate a financially viable development that has the potential to create jobs and contribute to the District’s economy. With these submissions, we are one step closer to making that goal a reality.”​

The four respondents to the RFQ are as follows:

The RFP was issued by DMPED on August 21, 2015 following a Request for Qualifications to qualify respondents for their development experience and financial capacity to oversee the redevelopment. Responses to the RFP were limited to the teams qualified in the RFQ, and responses were received on October 16, 2015. Response teams vary in their experience and proposed uses, yet many – if not most – consist of an array of significant development, architectural design, construction management, and historic design firms.

“We are excited to pursue quality development proposals that showcase the Franklin School’s unique construction and pays homage to its history,” said Deputy Mayor Kenner. “An investment in such a prominent landmark will further bolster the District of Columbia as a world-class city, support local business, and improve the lives of District residents.”

An interdisciplinary evaluation panel of District government staff will evaluate the RFP respondents and respondents will also work with the community as part of the evaluation process.

Named after Benjamin Franklin, the flagship school was part of the first comprehensive system of free universal public education in the District. For over 50 years, the Franklin School housed prominent public educational uses, from the city’s first normal school training future teachers, to the city’s first high school. During the twentieth century, the Franklin School transitioned from serving as a school to become the headquarters for the District’s Board of Education. The site is designated as a National Historic Landmark, a significant designation that ensures the preservation of major architectural features of both the exterior and interior of the building.”