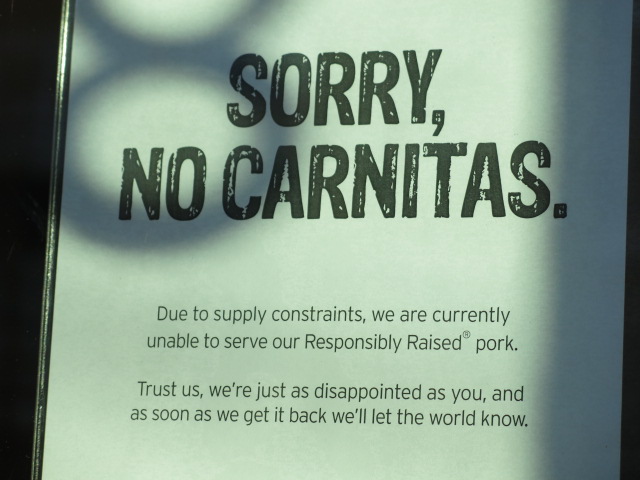 And in pork news, back in January I broke the news of Chipotle’s pork shortage. An update from the chain:

“Chipotle Mexican Grill (NYSE: CMG) today announced that it has restored most of its pork supply and is again serving Carnitas in 90 percent of its restaurants. The company expects to have Carnitas back in all of its restaurants by the end of November.

Chipotle stopped serving Carnitas at more than a third of its restaurants earlier this year after it suspended one of its primary pork suppliers when routine auditing found inconsistencies between the supplier’s operations and Chipotle’s pork protocol. Chipotle’s high standards require that pigs are raised with access to the outdoors or deeply bedded barns, without the use of antibiotics, and with no gestation crates. These practices are in stark contrast with how pigs are conventionally raised, so Chipotle opted to pull Carnitas from hundreds of restaurants rather than compromise its commitment to animal welfare.

“The decision to stop selling Carnitas in many of our restaurants was an easy one,” said Steve Ells, founder, chairman and co-CEO at Chipotle. “We simply will not compromise our high standards for animal welfare. Since making this decision, we have heard from thousands of our customers who have expressed support for our decision, and commended us for standing on principle. Now, we are excited to have Carnitas back in nearly all of our restaurants, and want to thank our customers for their patience while we worked to address this issue.”

Carnitas is now available at all Chipotle locations in the U.S. with the exception of restaurants in the Cleveland and Atlanta areas, and in North Carolina and South Carolina. Chipotle has been able to replenish its pork supply working with existing suppliers and by adding a new partner, United Kingdom-based Karro Food. Karro produces delicious pork from pigs raised to Chipotle’s high standards for animal welfare.

While Chipotle continues to prefer domestic sources for all of its meat, conventionally raised pork in the U.S. does not meet the company’s high standards for animal welfare. Pigs raised conventionally are raised indoors, in densely crowded conditions with little or no bedding. Most live on slatted metal floors that allow their waste to collect beneath them in liquefied pools. Mother pigs are often kept for months at a time in metal crates so small that they cannot turn around, and copious quantities of antibiotics are used to keep the animals from getting sick in these conditions. When faced with the choice between serving conventional pork in some of its restaurants or nothing at all, Chipotle chose not to serve Carnitas in hundreds of its restaurants rather than compromising its standards.”