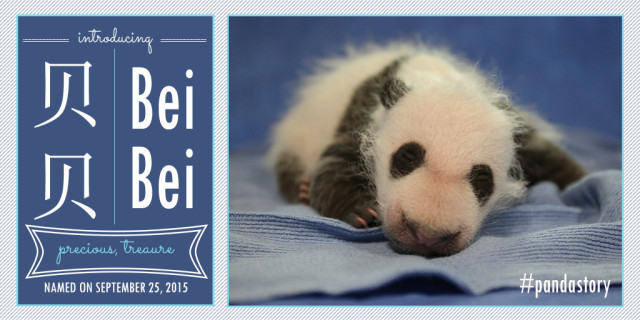 Bei Bei means “precious, treasure” in Mandarin Chinese and is complementary to his sister’s name, Bao Bao. In celebration of the state visit and as a special honor for the cub, the name was selected by First Lady of the United States, Michelle Obama, and First Lady of the People’s Republic of China, Peng Liyuan.

Mrs. Obama hosted Madame Peng at the Zoo to commemorate over four decades of scientific collaboration between the U.S. and China around giant panda conservation. The National Zoo received a state gift of two pandas in 1972 following the seminal state visit of President Richard M. Nixon and Mrs. Patricia Nixon to China. The two bears, Ling-Ling and Hsing-Hsing, lived out their lives at the Zoo.

After witnessing a brief cub health check inside the panda house, together Mrs. Obama and Mme. Peng selected a set of scrolls with the concealed cub’s name in Mandarin and English. Following ceremonial remarks by Smithsonian Secretary David J. Skorton, Mrs. Obama and Mme. Peng, third-grade students from the Washington Yu Ying Public Charter School assisted the First Ladies by unfurling the scrolls to reveal the cub’s name.

Historically, as giant pandas are indigenous only to China, the National Zoo has named panda cubs when they turn 100 days old in a nod to Chinese culture and traditions. Centuries ago, it was common for parents to name their newborns when they reached 100 days. Parents in China no longer wait to name their children, but it is still customary to host a celebration when a baby turns 100 days old. Scientists and keepers at giant panda breeding and research centers in China do not wait 100 days to name cubs born at those facilities. Bei Bei’s father Tian Tian and big sister Bao Bao were in their outdoor yards for the announcements and celebrated with panda-friendly frozen cakes.”