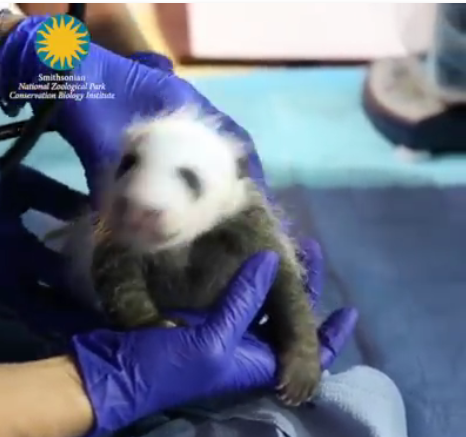 “Keepers were able to weigh the panda cub yesterday and she’s 2.95 pounds of adorable! The 4.5 week-old cub is now larger than both his siblings were at the same age. Bao Bao was about 2 pounds and Tai Shan was 2.6 pounds. He had a veterinary exam Sept. 17, and he’s 31 centimeters long from his head to the tip of his tail. He is able to push himself up on his 10 centimeter-long front legs and sometimes scoots around the den. He’s not walking yet, though. But, he can hear now! Keepers noticed that he reacted to the noise of a door opening on Saturday. His eyes won’t open for another few weeks.”

This is what 2.95lbs. of adorable looks like. At the same ages his siblings were 2 & 2.6lbs. #PandaStory pic.twitter.com/wFLBoQxbSo