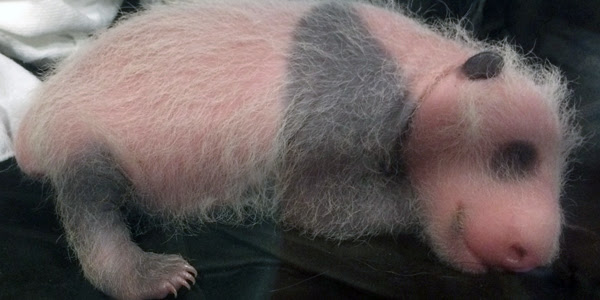 “Our panda cub is growing like a weed! He’s now 1.3 pounds (601.8 grams). That’s a weight gain of 58 grams overnight! In addition to packing on the grams, he is also starting to look like a little panda. His black markings are coming in; his first wisps of white fur are growing in; and every day his tail gets a little shorter. (Panda cubs grow into their tails.) He is squealing much less than he was during the first week and a half of life, and now mostly makes more of a grunting vocalization-all normal for a cub his age. His eyes are not open yet, but the panda team expects that they will start to open between 6 and 8 weeks. At his last two veterinary checkups he appeared to be very healthy and had a full belly each time.

Mei Xiang is becoming more comfortable leaving the den for short periods to eat and drink. It’s normal for a new panda mom to spend almost all of her time in her den with her cub. As her cub grows Mei will leave him in the den for increasingly longer periods of time so she can eat and drink. She left the den twice today.”

Read more →
More Stories
Random Reader Rant and/or Revel7:15pm, 100 Block of K St, NE “without provocation, he was punched in the face” bicycle then stolen