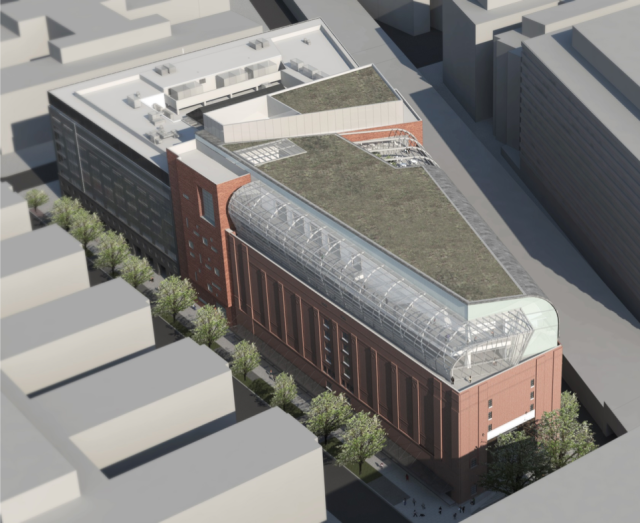 rendering of 4th and D Street, SW courtesy Museum of the Bible and SMITHGROUPJJR

The Museum of the Bible’s assets already include the Green Collection, approximately 40,000 objects that include some of the rarest and most significant biblical texts and artifacts ever assembled under one roof. Highlights include cuneiform tablets dating from the time of Abraham, biblical papyri and manuscripts, Torah scrolls, and rare printed Bibles. The Museum is set to be one of the most modern and technologically advanced museums in the world when it opens its doors in the fall of 2017.

“The Israel Antiquities Authority is thrilled and proud to partner with the Museum of the Bible on this landmark project. Making the archaeological heritage of the Land of Israel and the vital archaeological work conducted by the IAA available and accessible to people around the world is our mission. The rare opportunity to have a long-term exhibition in the U.S. Capital of a large selection of archaeological treasures that were excavated in Israel and illuminate the story of the Bible is remarkable. We hope that the many expected visitors will enjoy the archaeological exhibits and learn about the periods and descriptions of the Bible and the rich and diverse history and the archaeology of the Holy Land,” said Israel Hasson, Director of the Israel Antiquities Authority.

“When we set out to build the best new museum in the world, we knew the museum would be even better if we joined forces with some of the greatest collections anywhere. The Israel Antiquity Authority’s unparalleled two million artifacts, along with the 40,000 objects in Museum of the Bible’s Green Collection, will combine for a new standard of museum experience, unlike any ever seen before,” said Cary L. Summers, Museum of the Bible’s President.

The Israel Antiquities Authority exhibit space of approximately 4,000 square feet will be built out by Museum of the Bible’s state of the art teams that have been bringing the museum to life since before its February 2015 groundbreaking. The Museum of the Bible architectural plans have allotted approximately 20,000 square feet to visiting museums and libraries and partners like the Israel Antiquities Authority.

The Israel Antiquities Authority previously exhibited the Dead Sea Scrolls in the Library of Congress in Washington, DC in 1993 in an exhibition entitled: “Scrolls From the Dead Sea: The Ancient Library of Qumran and Modern Scholarship.”