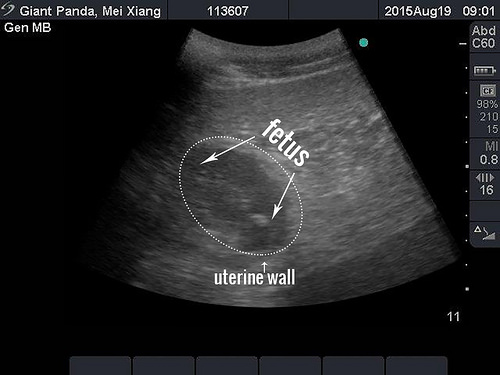 “For the first time at the National Zoo, veterinarians detected something new during an ultrasound procedure this morning on giant panda Mei Xiang. They believe it is a developing giant panda fetus. Based on the size of the fetus, which is about four centimeters, veterinarians estimate that Mei Xiang could give birth early next week, or possibly in early September. In past years, veterinarians have only detected changes to Mei Xiang’s uterus, which occurs for both a pregnancy and pseudopregnancy. Historically, and since Aug. 7 of this year, Mei Xiang declined participating in ultrasounds at this stage, so it was a surprise when she responded to the panda keepers’ calls this morning.

There is a substantial possibility that Mei Xiang could resorb or miscarry a fetus. Scientists do not fully understand why some mammals resorb fetuses.

The Zoo’s panda team is monitoring Mei Xiang through the Zoo’s panda cams. She is continuing to spend more time in her den, sleeping more, body licking and cradling objects – all behaviors consistent with a pregnancy or pseudopregnancy.

“Today, we are cautiously optimistic,” said Dennis Kelly, director of the Smithsonian’s National Zoo. “We want a healthy cub for all the right conservation reasons. I am excited, but I have to say that we were prepared for a cub even before this morning’s ultrasound. Our expert team of keepers, scientists and veterinarians are going to do exactly what they are trained to do and I’ll just ask everyone to remain positive with us.”