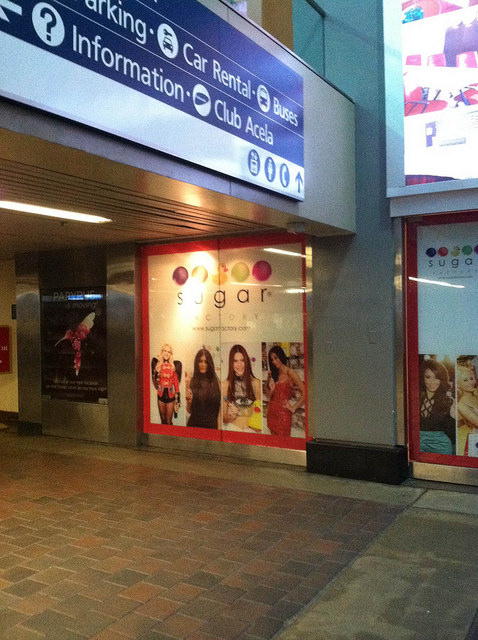 “a candy store (I think the same one as in Chinatown Ed. Note: similar looking but not the same folks) appears to be coming to Union Station, in the same space where the Papyrus used to be. (Papyrus recently moved to a different space in another part of Union Station.)”

“Sugar Factory has made confections part of popular culture and has turned sweets into the latest designer accessory. Best known for its signature Couture Pops, iconic superstars including Britney Spears, Drake, Nicole Scherzinger, Kim Kardashian, Eva Longoria, Carmen Electra and Rupert Grint are just a few of the celebrities who have either endorsed or have been spotted with the sparkly lollipops. The celebrity afﬁliations have made Couture Pops an international phenomenon with widespread media attention from The Today Show, Daily Mail, AOL, Good Morning America, People, Extra and more.

Colorful candy bins line the walls and walkways of the retail stores, where stylish retail for all ages hang from walls and racks. Signature candies such as fudge-covered pretzel sticks, milk chocolate-covered Oreos and Rice Krispies Treats® coated with frosting appeal to the most discerning sweet tooth. Freshly made gelato available in an array of ﬂavors cool off and delight guests. Framed photographs of celebrities holding various Couture Pops hang high from the walls, making Sugar Factory more than just a retail store; it’s also a popular spot for sightseeing.”

Read more →
More Stories
The Potter’s House (Cafe+Books+Community) Reopens in Adams Morgan – A Look Inside and at the new MenuIt May Be Cold Today but Peak Cherry Blossom Bloom is 4/11-4/14!