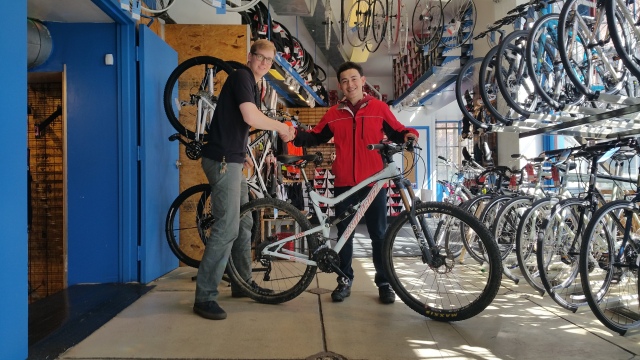 “The managers of City Bikes in Adams Morgan helped to recover a loyal customer’s bike that was taken from him at gun point on Sunday night. He had brought it in for service on Sunday afternoon but elected to wait to get it performed until later in the week, letting us know it was stolen on Monday.

Our store manager recognized the stolen bike this afternoon when a man brought it in to fix the same problem from Sunday and promptly contacted the customer who had informed us of the theft, along with the police. Our general manager, yours truly not in uniform, followed a block behind the man in possession of the bike when he left the shop after being unable to avoid the necessary repair.

When the cops showed at the shop, they were directed to the Starbucks at 18th and Adams Mill, where the man was hanging out with some friends.

About an hour later a detective came to interview the store manager about the damage to the bike, and was able to identify the original owner because the bike came in twice for the same mechanical issue.

Another hour later, our loyal customers returned to the shop with the bike covered in finger print dust, telling us that he had identified the man in possession of the bike as the same one who had held him up at gun point! He was so excited to have it back that he’s going to get the repair after all.