Washington Circle is the westernmost of the many public spaces laid out in L’Enfant’s plan for Washington City, and it was designed as a circle from the start. To the south in the early days was the low-lying area known as Foggy Bottom, a desolate, semi-industrial neighborhood. Little of the land to the north was developed. While many Washingtonians passed through the circle as they traveled along Pennsylvania Avenue between Georgetown and Washington, few stopped here. Known as the “Round Tops” for the high cupolas on a pair of houses located just to the northwest, the neighborhood around the circle had a reputation for being dangerous. It is usually mentioned in early newspapers in connection with petty crimes. The circle itself was simply a large open area in the middle of the street. 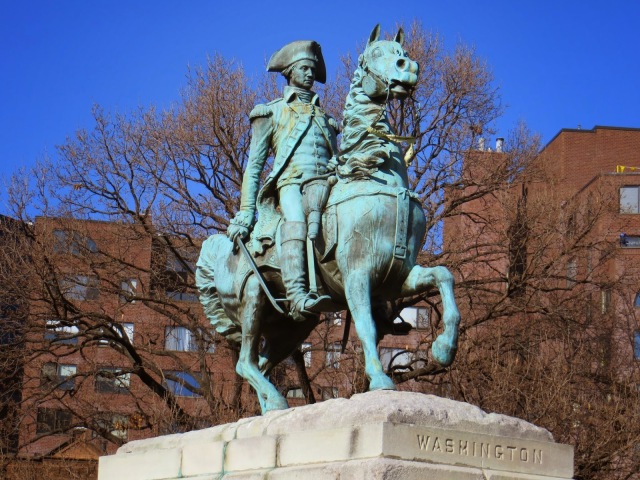 The statue of George Washington in Washington Circle (photo by the author).

Meanwhile, sculptor Clark Mills created a sensation with his tour-de-force statue of Andrew Jackson on a rearing steed, which was unveiled in Lafayette Square in 1853. Proud of this American-made monument, Congress responded by immediately commissioning Mills to create another statue to honor George Washington. Everyone expected the new memorial to be even more stunning than the Jackson statue. The princely sum of $50,000 was authorized to pay for it.

It’s unclear when or how the decision was made that the new Washington statue would be placed in the circle at Pennsylvania Avenue and K Street NW. Perhaps that decision led to the sprucing up of the circle in 1855, when a wooden fence was built around the central part of the circle, thus forming the city’s first traffic circle. But by all accounts the improvements were minimal; the circle remained a wasteland until the arrival of the Washington statue.

The February 1860 unveiling of the statue—only the second outdoor monument of its kind in the city, after Mills’ Jackson statue in Lafayette Square—was a major celebration, the “last great public nonpartisan demonstration in the ante-bellum capital,” according to historian Constance McLaughlin Green. The day started off rainy, and the streets were muddy from the thaw of the previous winter, but swarms of people turned out nonetheless. A military parade formed with many different groups represented—the Baltimore Grays, the Chestertown Reed Rifles, the New York Seventh Regiment, the Potomac Light Infantry, the Alexandria Sun Fire Company, the Baltimore Knights Templar. Special police with distinctive red badges on their hats maintained order for the hours-long procession on the Avenue. According to The Evening Star’s extensive account, “No little merriment was created by the appearance upon the avenue of a savage-looking bull-dog whose mug was of indescribable ugliness, and who bore about his neck one of those red badges bearing in large letters the designation ‘Special Police.'” 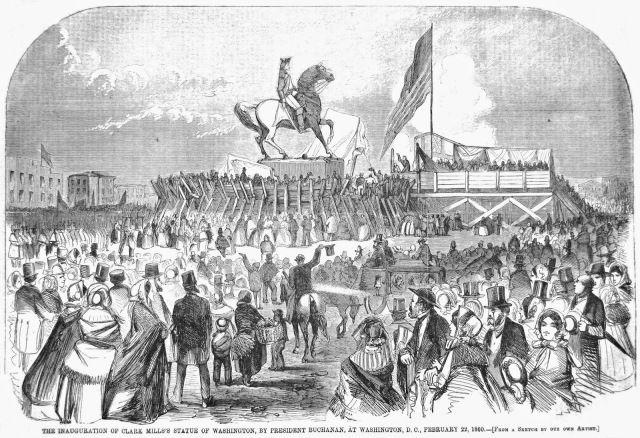 Representative Thomas S. Bocock (1815-1891) of Virginia gave the major oration. Bocock found the Washington Circle location, on a slight rise from the surrounding Foggy Bottom lowlands, to be an “appropriate spot where the summer sunbeams latest linger, and where the breezes from the blue hills of [Washington’s] own native and beloved Virginia delight to play.” He predicted that future Washingtonians would see the statue as “the Palladium of their privileges and the silent guardian of their prosperity.” Just two years later Bocock would be gone from Washington City, serving instead as Speaker of the Confederate House of Representatives, and the prosperity of the city would be much in doubt. President James Buchanan, who took the stand after Bocock, was much less optimistic in his brief remarks: “…May Washington City, which [Washington] founded, continue throughout many generations to be the seat of government of a great, powerful and united confederacy. Should it ever become a ruin by a dissolution of the Union, it will…teach the lesson to all the dwellers upon earth that our grand political experiment has failed, and that man is incapable of self-government….”

With all the festering undercurrents of sectionalism, Mills’ statue served as a focal point for the day’s fleeting sense of unity. Though it lacked the flair and drama of his previous effort, few criticized its aesthetics. Mills had originally planned a much larger composition consisting of several tiers of statuary depicting important moments in American history, with the Washington statue on a 30-foot pedestal in the center. Congress declined to appropriate the money for the more elaborate memorial, and instead the statue was placed on a plain, white marble pedestal, as it remains today. It depicts Washington appearing sternly resolute in the face of British troops at the Battle of Princeton, New Jersey, while his horse shrinks back in terror. Supposedly Washington had “advanced so near the enemy’s line that his horse refused to go farther, but stood and trembled while the balls which were fired tore up the earth under his feet; and amid this scene sat, calm and collected, the hero” (as quoted in The New York Times from Charles Wentworth Upham’s Life of Washington).

Stereoview of the statue, circa 1890 (author’s collection).

To modern eyes, General Washington may appear more zombie-like than resolute. His stiffness, coupled with the crouching backward draw of his horse, makes for an unusual tableau. As a result, critics over the years have not always thought kindly of the work. In 1917, Charles Moore (1855-1942), chairman of the U.S. Commission of Fine Arts, dismissed it as lifeless: “No sentiment…lurks in Clark Mills’ Washington. That statue need not stand on the order of its going. It is not even a good exemplar of the art of the crimping iron, which instrument its curves strongly suggest.” 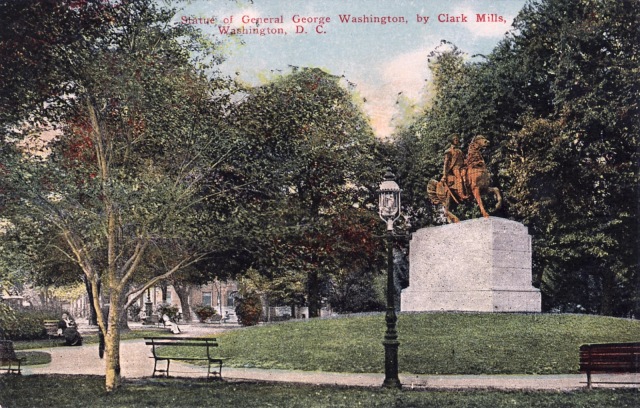 A circa 1910 postcard view of a very leafy Washington Circle (author’s collection).

The area around the circle began to improve in the latter part of the 19th century, and as Governor Alexander Shepherd made improvement throughout the northwestern part of the city, more attention was devoted to maintaining a well-manicured Washington Circle. The wooden fence was replaced with an iron one in 1869, and by the 1880s a full-time watchman was assigned to maintain the park. A 1905 inventory listed 48 different species of trees in the park, many of them imported and non-native, making for a lush refuge from the dense city blocks that had developed around it. 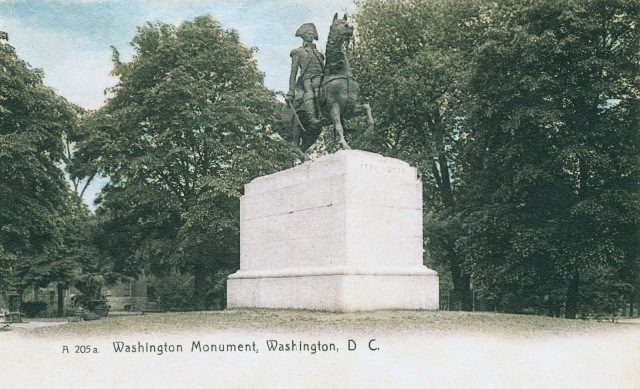 Another early postcard view of the statue (author’s collection).

With Andrew Jackson taking pride of place in Lafayette Park directly in front of the White House and George Washington, the father of our country, shunted off to an outlying circle, there was bound to be talk of correcting the seeming imbalance of this arrangement. In 1907, when additional statues of revolutionary war heroes were being added to the corner of Lafayette Square, an Army official first proposed moving the Washington statue there, rechristening the park “Revolutionary Square” and moving the Jackson Statue to Washington Circle, which would be rechristened Jackson Circle.

The switch wasn’t made, but it came much closer to happening in 1923. By that time, the statue had suffered significant weather damage, and it was removed and shipped to the Roman Bronze Works in Brooklyn, New York, for repairs. Workmen discovered to their surprise that the three hooves of the bronze horse had been so firmly embedded in the marble base that it was impossible to remove the statue. It took an extra week of work to melt the bronze at the base of the hooves with acetylene torches and extract the statue. According to The New York Times, the extraction effort draw many curious onlookers, “but the most agitated spectators were a pair of English sparrows, witnessing the passing of their home—a nest inside the horse’s head, to which they gained access through the nostrils.” 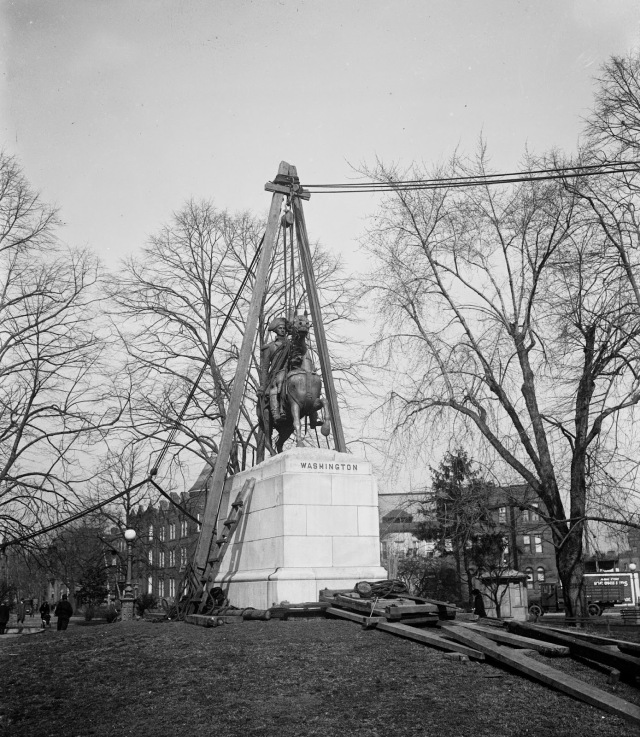 Removal of the statue in 1923 (Source: Library of Congress).

Once the statue was removed for repairs, the idea was raised again of swapping it for the Jackson Statue. President Harding was reported to have been very enthusiastic about the idea. Once that happened, naturally aesthetic considerations were immediately forgotten. All that many lawmakers noticed was that Jackson, a Southern Democrat, was to removed from Lafayette Square under a scheme blessed by a Republican president from Ohio. The Times quoted unnamed Democrats as complaining that the plan was “an outrage, nothing but the rankest sort of partisan politics.” Needless to say, Congress refused to fund the switch, and it never took place.

The Washington statue was restored and returned to Washington Circle, where it has remained ever since. The profuse and well-tended flora is long gone. The meandering walkways that were laid out in the late 19th century were replaced in 1932 with a more straightforward arrangement of radial and circular sidewalks. From 1960 to 1962, the statue was temporarily removed as the K Street underpass was constructed to relieve traffic congestion, but it was subsequently returned to its original position. The National Park Service, which had allowed the circle to become overgrown with weeds and brush during construction, began maintaining it again, and it assumed its modern appearance. From 2012 to 2014, the District Department of Transportation reconfigured pedestrian crossings at the circle as part of its New Hampshire Avenue reconstruction project, resulting in significantly better public access to Clark Mill’s odd but historically significant statue of George Washington. 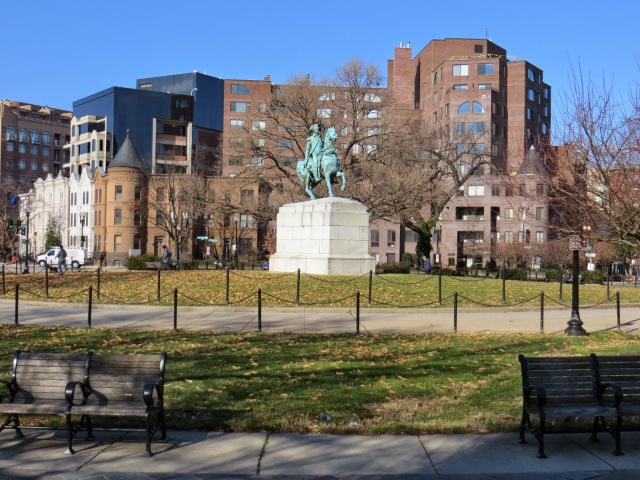