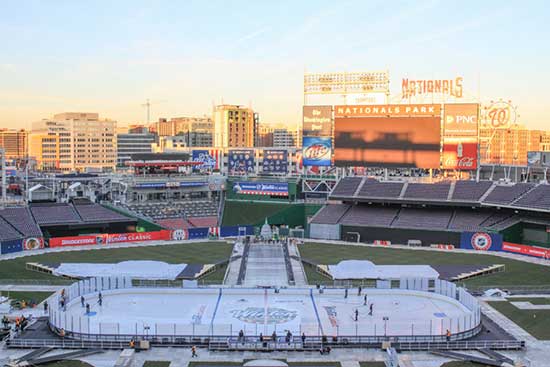 “The Metropolitan Police Department would like to advise the public and members of the media of the following street closures in connection with the 2015 NHL Winter Classic scheduled for Thursday, January 1, 2015.

The proceeding streets will be closed beginning approximately at 8:30 am and should reopen by 6:30 pm.

Heavy congestion is expected and motorists should avoid passing through the area, particularly because of the large volume of vehicular and pedestrian traffic going to National’s Stadium where the event is scheduled to kick-off. Motorists should tailor their journeys accordingly and may wish to consider alternative routes.”

Metro will run additional trains before and after the NHL Winter Classic on Thursday, January 1.

On New Years Day, Metrorail will operate on a Sunday schedule on all lines from 7 a.m. until midnight. Metro will add 8-car trains before and after the Winter Classic to provide extra capacity for customers attending the event. Off-peak fares will be in effect all day, and parking will be free at Metro-operated facilities.

There is no scheduled track work on January 1.”