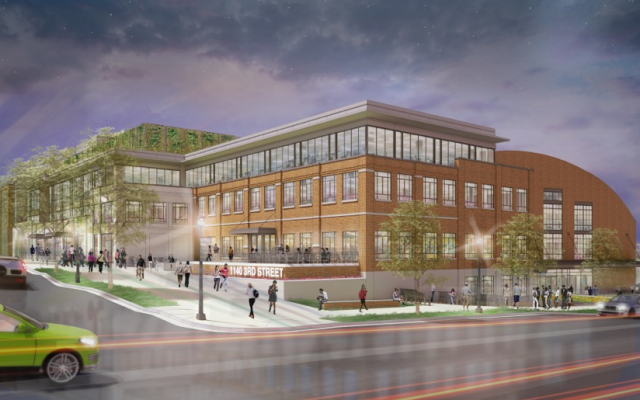 “Uline Arena is an exciting office/retail re-development in the burgeoning NoMa neighborhood of Washington, D.C. The 2.5 acre site is located at the intersections of Delaware Avenue NE, M Street NE and 3rd Street NE, with Congress Street NE dying into the property. The property is currently occupied by the Arena building (historic), the Ice House building (historic), and two other commercial buildings, most used as parking structures. The Arena building, best known for being the venue for the first American concert given by The Beatles, is also architecturally significant due to its concrete barrel vault roof and structural concrete arches. The Ice House building is the original ice manufacturing facility which provided ice for the skating rink within the Arena building. It was there where Mr. Uline created his patented equipment which became so successful that the Arena building became necessary.

The currently single-story Arena building will be converted to a single level of retail below three levels of office space. The Ice House building will have additional ground level retail space with a portion of the first level being dedicated to office. Above this will be two additional levels of office space. This will require additional space added to the Ice House building, which will occur in a sleek new glass structure extending above the original roof line of the Icehouse. Additionally, a new 168-space, 4-level parking garage will be constructed on the southeast corner of the site.”