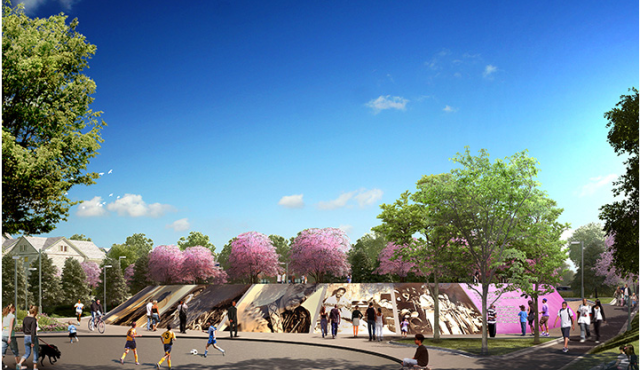 “Go-Go, a subgenre of regional contemporary music that originated in Washington, D.C. during the mid 1960’s, is celebrated in this memorial for Chuck Brown, the legendary “Godfather of Go-Go.” When Chuck Brown passed away, the D.C. community yearned for a civic space where we could honor his musical legacy. This design, second in a series Marshall Moya Design has proposed for the D.C. government, incorporates photo mosaics of Chuck Brown from performances throughout the history of his career in a memorial park setting. MMD’s landscape design establishes an environment that captures the essence of this iconic musician with quintessential Washington, D.C. plantings of the region by using cherry blossoms and magnolia trees throughout the site.”