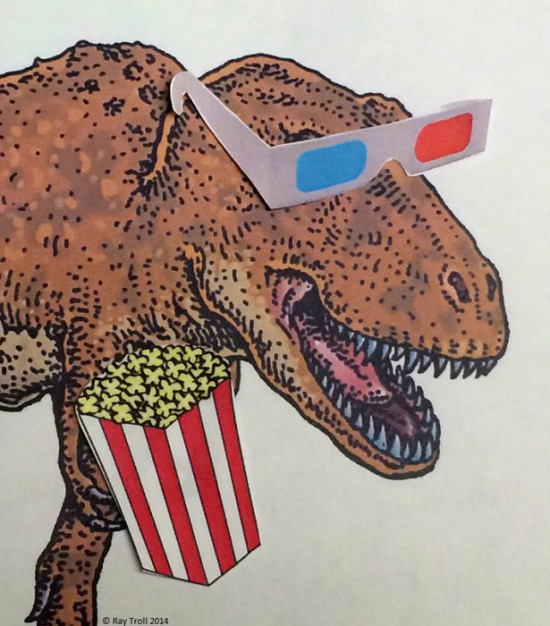 “To herald the closing of the National Museum of Natural History’s Fossil Hall for a five-year renovation and to celebrate dinosaurs, the Museum is planning a weekend of fossiliferous fun April 26 and 27. The Environmental Film Festival and the National Museum of Natural History will present a free Dino Film Fest on Sat., April 26 from 1 to 7 p.m. at the Museum’s Baird Auditorium. Explore the science behind dinosaurs in classic films, including King Kong, The Valley of Gwangi and The Last Dinosaur with Matthew Carrano, the Museum’s Curator of Dinosauria. He will consider how dinosaurs have been depicted in film and answer questions such as: Did dinosaurs really roar? What color were they? How were T. rex and Allosaurus similar and how were they different? Did T. rex ever battle Triceratops, and, if so, who won? Whether campy or surreal, scary or comical, these films reveal how movie dinosaurs have inspired audiences (including scientists) for the better part of a century.

As part of the celebration the Museum will also show director Steven Spielberg’s Jurassic Park up close and in 3D! Hailed as “a triumph of special effects artistry” (Roger Ebert, Chicago Sun-Times), this epic film, starring Richard Attenborough, Sam Neill, Laura Dern and Jeff Goldblum, visits a remote island where dinosaurs once again roam the Earth and five people must battle to survive among the prehistoric predators. Two special screenings are scheduled for April 26 and April 27 at 7:30 p.m. with discussion of the science behind the film with Matthew Carrano, the Museum’s Director of Dinosauria. Tickets, $15, are here, or by calling 866- 868-7774, or at any Smithsonian IMAX theater box office.”