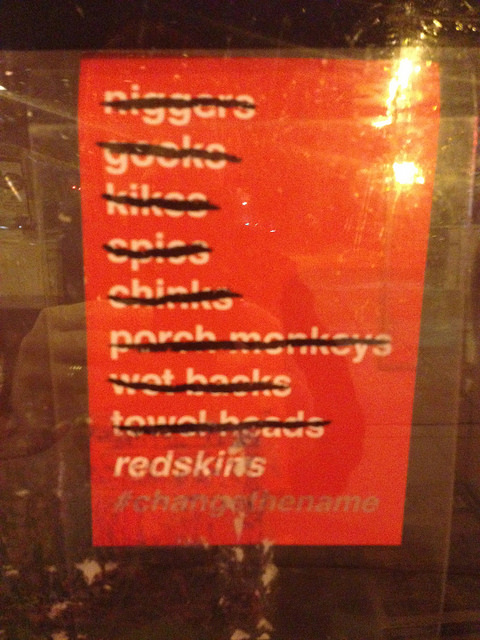 “Native people, organizations that represent them, allies of every background, and Members of Congress have for years protested and demanded a change in the disparaging and racist Washington football team name, but have made no progress with the National Football League or with team owner Daniel Snyder. A pending legal action holds real promise, but it should never come to that. When Adam Silver saw racism, he acted without hesitation to the acclaim of the nation. The increasing controversy and activism surrounding the name of our hometown football team are in search of a similar national sports leader. Roger Goodell, as the commissioner of his league, is inevitably that leader and stands at the crossroad of either leading the NFL to take the morally required action or condoning the current name of Washington’s football team. While the team’s attempts to trademark the team name have been turned back four times on grounds of disparagement by the U.S. Patent and Trademark Office, and a new ruling that could result in a name change is expected soon, Commissioner Goodell must not allow the NFL to be seen kicking and screaming to rid the league of a team name that carries racist and demeaning connotations from a bygone era.”

Last May, Norton and nine other members of Congress sent letters to Goodell, Washington football team owner Daniel Snyder, the 31 other NFL franchises, and Washington football team sponsor FedEx, urging a change in the team name. Last March, Congressman Eni Faleomavaega (D-AS) introduced a bill, which Norton and the others who signed the letter cosponsored, to cancel existing trademark registrations containing the term “redskin,” and deny registration for new trademarks using the term.”