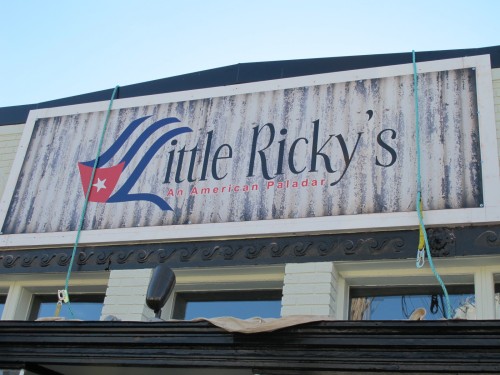 Thanks to a reader for sending the update from Little Ricky’s facebook page:

“Very soon you are going to see a big change at Little Ricky’s, most notably will be the menu. As with a great many things we tire of repetition and long to shake things up. Food is no different so with that Little Ricky’s will be shaking things up in the coming month reorienting our focus from Cuban cuisine to a pointedly Southern, albeit diverse, offering. Now, everyone in the restaurant industry has said we are nuts, and while we are certain they are correct- we’ve never been much for convention nor for playing it safe. Some will love the change, some will hate the change…to that end we are certain that those who hate it will tell us just how much on Yelp. That’s cool. For everyone else and those that have generously been our test subjects for various new menu items…..hold on to your britches dahlins cause it’s going to be a fun ride.

Chef Miguel, who is coming on as a partner in the venture, has created a fantastic menu that frankly we are super excited about. Little Ricky’s Dishes of the South draws inspiration from the Carolinas over to Texas, and points in between. Simplicity, Tradition, and a Celebration of Southern Micro-Cultures, that express themselves in the depths of flavor, are the themes that will drive our dish creation. The menu will be rolled out the evening of May 1st as we host the Ward 5 Happy Hour.

In preparation for the roll out we will be closed on Tuesday and Wednesday April 29th & 30th for a kitchen re-org. Sorry to disappoint anyone but it will be well worth it! See ya’ll on May 1st.”