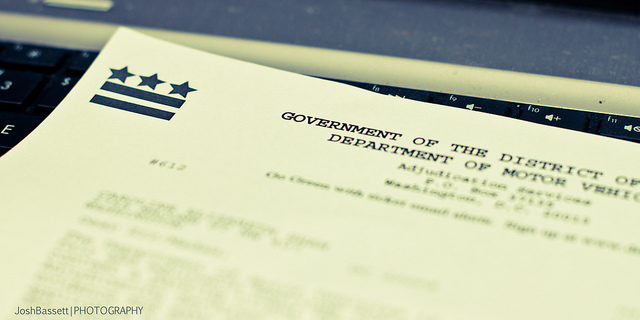 Taking a Ticket Beyond Appeal:

“So about 6-12 months ago (I forget how long it’s been now) I received a parking ticket in the mail. The kicker is I don’t own a car and haven’t since December 2011. I called 311 to speak to someone about it and she pulled up the ticket online which clearly showed the officer had written the wrong license plate number on the ticket versus what was shown in the photo of the car. I guess that incorrect plate # linked to me somehow? Not really sure, but somehow it found its way to my address. She said there’s no way I should be responsible because of the obvious photographic error, and transferred me over to someone in charge of ticketing (DPW maybe?), but I just got the voicemail of that woman, and naturally she never returned my message.

So I mailed in my appeal stating my pretty simple to resolve case, and a few months later received a notice that my appeal was rejected due to a “preponderance of evidence against me”. Ummm, OK, if anything there’s a “preponderance” the other way, so I sent in my second appeal to “The Board” along with a check which is required to further appeal any ticket, just in case they still disagree with you. At this point I was considering just saying F-this and have them come after me if they really care to, but I wanted to fight this one just on principle alone. Well I noticed today they actually cashed the check a while back and never even sent a followup letter explaining why, after reviewing 2 obvious pieces of information 1) I don’t own a car and 2) wrong license plate number.

So, my question is, does anyone know who to take this to further? It’s only $30, an insignificant amount, but the fact that 1) an officer got it wrong, 2) the person who reviewed my appeal ignored obvious facts, and 3) the entire appeals board ignored obvious facts, really has me quite pissed off. I know if it’s happening to me it’s happening to others too, on much higher ticket fines. This kind of blatant disregard for the citizenry who pays their salaries shouldn’t be tolerated.”