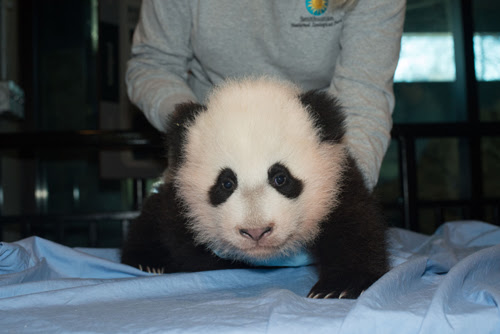 “Bao Bao is becoming a master at giant panda locomotion! She climbed up on the rockwork in Mei Xiang’s enclosure early Wednesday morning all by herself. She took a little tumble, but she was completely unhurt and Mei Xiang quickly came to her side. Undeterred by gravity, she soon was at it again and pulled herself back up on to the rockwork. Mei ended the climbing session shortly after her second successful attempt.

Wednesday keepers offered Bao Bao her first taste of juice. Since Bao Bao showed interest in the juice, they will likely use that as a reward during future training sessions with her.

Keepers have noticed that Mei Xiang may be ready to take Bao Bao outside. In the next week you may notice Mei Xiang and Bao Bao exploring different parts of the David M. Rubenstein Family Giant Panda Habitat together – including Mei’s newly cub-proofed outdoor areas! But don’t rush to the Zoo to see the two of them quite yet. Bao Bao will not be visible to the public until January 18 (only FONZ members will be able to see her from January 11 to January 17). If Mei does choose to venture outside with Bao Bao, the panda team will close the area around the panda habitat to provide quiet for the bears. But panda cam viewers will still be able to see them on the cams.”

Read more →
More Stories
Ben’s Chili Bowl Coming Soon to former Ray’s the Steaks space in ArlingtonDear PoPville – Who is Responsible for Designing the Drop Off/Pick Up Area at Union Station? Can it be Fixed?