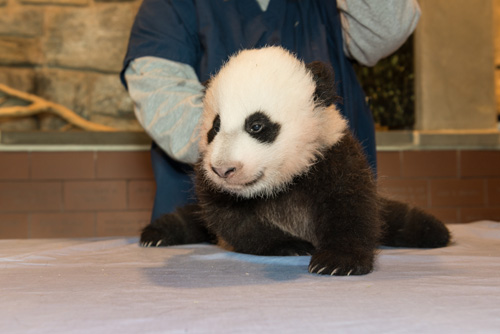 “The panda cub was weighed and measured again this morning! She now weighs 9.68 pounds (4.4 kilos). She is still very round measuring 18.11 inches (46 centimeters) around her belly. But her nose is starting to lose it’s pink color and turn black like an adult panda nose. She is also crawling with a lot more control now. Mei Xiang hasn’t ventured out of the den with her again, but she does periodically move the cub to the doorway of the den.

Don’t forget to cast your vote to name our giant panda cub! More than 85,000 people have voted so far! The poll is open until November 22. On December 1, when the cub is 100 days old, we will announce the winning name.”