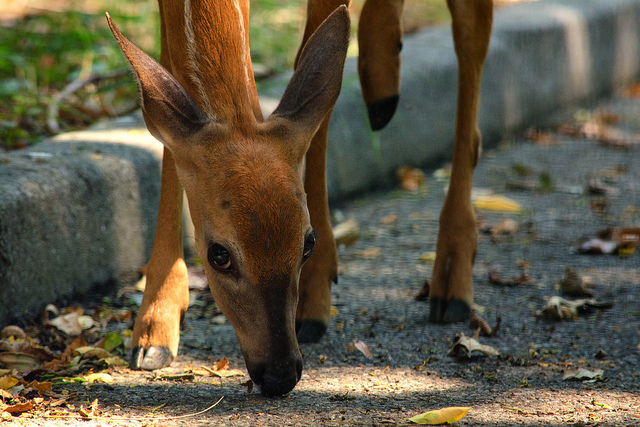 “Deer alert! In the coming weeks, the deer population will enter its mating season and motorists should be on the lookout for the animals crossing roadways and making erratic moves. Called the “rutting season,” this is a time when deer collisions with vehicles are prevalent and often unavoidable. However, the Maryland State Highway Administration (SHA) cautions motorists to never veer for deer.

“Collisions with deer are not always avoidable, but there are steps drivers can take to reduce the chance of a deer strike,” said SHA Administrator Melinda B. Peters. “For your own safety and that of other drivers, never veer for deer. We see crashes where drivers lose control and vehicles have gone off the road, often severely injuring the passengers.”

Never “VEER” for deer. Making sudden sharp turns is dangerous as it could place a driver in the path of on-coming traffic or cause the vehicle to strike a fixed object such as a tree or utility pole.

Slow down in known deer areas. Driving slower will allow you to stop your vehicle more quickly. SHA works with the Department of Natural Resources and posts deer warning signs along know deer crossings, but deer can be anywhere, at anytime.

Be aware of your surroundings. Deer feed primarily between sunset and sunrise and often live in forested areas or rural regions near watersheds.

Be familiar with deer behavior. Deer travel in herds. If you see one, chances are good that there are more to follow.

Stay alert. When traveling through a known deer crossing area, keep both hands on the wheel and eyes on the road.

Drive carefully at night. Use your high beams where possible and when there is no oncoming traffic. High beams illuminate a wider area and often reflect the eyes of deer standing along the road.

Clean your windows and ensure all exterior vehicle lighting is operational. A clear windshield will help you see for greater distances.

Use peripheral vision. Scan the entire area around the road for movement that would indicate the approach of animals.