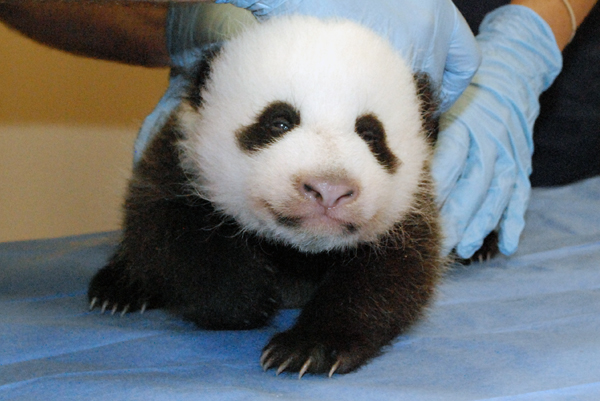 “The gates at the Smithsonian’s National Zoo will open to the public Friday, October 18! The live animal cams were turned off during the government shutdown, including the panda cams. The Zoo’s Information Technology staff began the process of bringing the live animal cams back online Thursday morning, starting with the panda cams. The 15 different camera systems required federal resources, primarily staff, to operate and were deemed non-essential during a shutdown.

With the return of the cams, giant panda fans can once again watch the Zoo’s eight week-old cub and her mother Mei Xiang. Since the panda cams went dark the cub has grown and passed several developmental milestones. She weighs five pounds (2.557 kilograms), up from 3.07 pounds (1.39 kilograms) at her veterinary exam September 26. She also has partially opened her eyes. Keepers noticed that her right eye had started to open October 4. By October 11, both her eyes had partially opened. Her ears are also fully open and she now reacts to the noises she hears in the panda house.

Mei Xiang is leaving the cub for longer periods of time to eat, drink, interact with keepers and venture outside for very short periods of time. She is eating all of her leaf-eater biscuits and produce that keepers offer her every day, and approximately 60 percent of her bamboo. Saturday, October 12, she chose to participate in a training session with keepers in her outdoor training area.

While her mother spends time in other parts of the David M. Rubenstein Family Giant Panda Habitat the cub scoots around the den, though she does not get very far.

She will not be able to walk until she is about four months old, and has not left the den on her own yet. She is strong enough to push herself up on her front two legs and right herself if she is lying on her back.”