“The Newseum has revealed the design of “Anchorman: The Exhibit,” which features props, costumes and footage from the 2004 hit comedy “Anchorman: The Legend of Ron Burgundy.” The exhibit, created in partnership with Paramount Pictures, will open on Nov. 14, just weeks before the film’s highly anticipated sequel “Anchorman 2: The Legend Continues” hits theaters on Dec. 20.

Entering the exhibit, visitors will be greeted by a giant display case featuring the iconic burgundy business suit worn by fictional newscaster Ron Burgundy, played by Will Ferrell. Towering more than eight feet tall, the revolving display will provide a fitting entry point for this one-of-a-kind exhibit. Throughout the exhibit, visitors will see other reminders of Ron’s reporting prowess and personal style, including his license plate, which reads “IM #1,” three local Emmy awards for excellence in news reporting, his mustache brush, jazz flute and other classic props used in the hit movie. Props from “Anchorman 2: The Legend Continues” will be added to the exhibit shortly before the sequel’s Dec. 20 release.

Nearby, Ron will provide intros to the Newseum’s popular Be a TV Reporter experience, and budding news anchors can have their photos taken behind a replica of the Channel 4 News desk.

The exhibit also will explore the reality behind the film’s humor. Local TV news promotional ads from the 1970s will be on display along with photos of popular news teams of the day. Before today’s 24/7 news cycle, local TV anchors ruled the airwaves, and the anchor chair was for men only. But dramatic changes hit local TV news in the 1970s when women stepped up to the anchor desk, and news teams took over.” 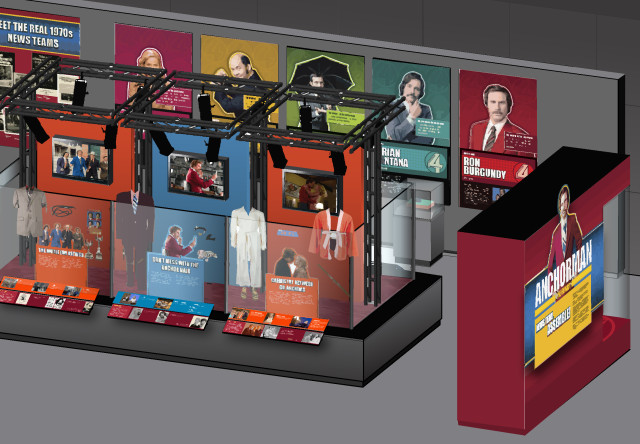 More Stories
Breakfast All Day, New Hours and Fall Menu at DGS Delicatessen in DupontMetro Ridership Down 22%, Trains Will all be 6-Car Until Further Notice (Due to Shutdown)