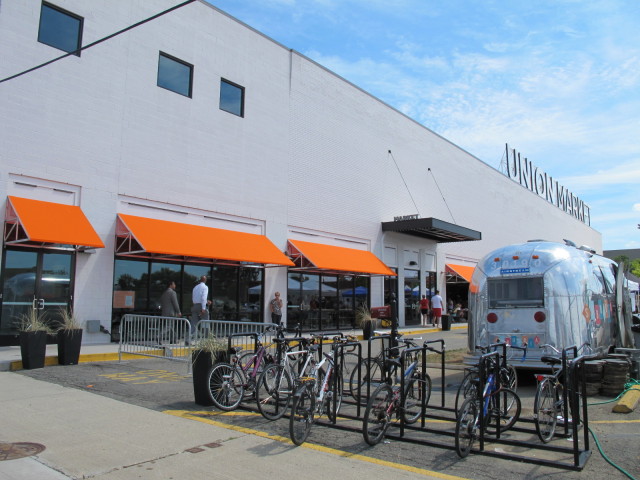 “In exactly one month, the team behind acclaimed beer destinations such as Birch & Barley, ChurchKey, Rustico and Bluejacket will host their second annual craft beer festival, Snallygaster. Named for the fearsome and mythical dragon-like beast said to terrorize the region at the turn of the century, this year’s festival will feature an even more expansive and stylistically far-reaching list of no less than 200 artisanal craft beers all handpicked by famed Beer Director Greg Engert. This year, Snallygaster is going to be held at Union Market (located at 1309 5th Street NE) on Saturday, October 19 from 1 to 6 PM. It is an event to benefit Arcadia Center for Sustainable Food & Agriculture.

This year, Snallygaster will tap 200 unique beers on the grounds of Union Market. Beer director Greg Engert has been busy sourcing an unbelievable array of craft ales and lagers for the festival all of which will be revealed leading up to the event.

§ Over 75 different seasonal selections like Oktoberfests, Pumpkin Ales and Fresh-Hop Harvest brews
§ 16 singular rubber-clad gravity kegs sourced from Franconia, Germany; the largest one-time collection ever assembled for our region
§ 6 distinct wood-clad gravity kegs serving German & Austrian specialties, including one five-foot tall 90-liter wood-clad gravity keg making its regional debut
§ No fewer than 10 authentic cask ales, featuring classic selections, as well as, cask debuts from both established and new British & American producers
§ An ever-growing list of crazy scarce drafts from across the USA and beyond
§ The DC debut of rare brews from a number of new local brewers
§ At least 25 kegs and casks never before seen in the District

Greg Engert is adding new beers to the ever-expanding list daily. Updates can be found on Facebook and Twitter. A full list of the craft beers will be available at www.snallygasterdc.com before the event.

From a group that firmly believes beer and food make for the greatest of pairs, the festival food offerings will tempt and delight the palates of Snallygaster attendees. The move to Union Market allows Red Apron Butcher to take the spotlight. Chef Nate Anda and his team will be offering a varied selection of handmade sausages, brats and artisanal hot dogs, while a variety of hearty Oktoberfest-style fare will complement the many brews, and DC’s finest food trucks, including DC Empanadas, Red Hook Lobster Pound, DC Slices and Takorean will round out the selection.

One Love Massive will be providing the day’s entertainment with a lineup of local DJ’s, crowd entertainers and more. In addition to recreational lawn games like corn hole, Arcadia Farm & their Mobile Market will host a kid-friendly zone with educational and farm & kid-friendly activities.

Guests of Snallygaster will be asked to pay a $10 donation at the door to benefit Arcadia Center for Sustainable Food & Agriculture. Children (14 and under) accompanied by a parent will be admitted at no cost. Food and beverage tickets ($1 for 1 ticket) will be sold separately with items costing on average between 5 and 9 tickets. Advance ticket are on sale now. Packages include “The Kraken” pass for $30 (1 PM entry bypassing general admission lines, admission fee, 25 food + drink tickets and an official Snallygaster beer mug) and “The Jabberwock” pass for $50 (12 PM VIP early access, 30 food + drink tickets and an official Snallygaster beer mug). To purchase tickets, see the full beer list or get ongoing updates about the event, visit www.snallygasterdc.com.”