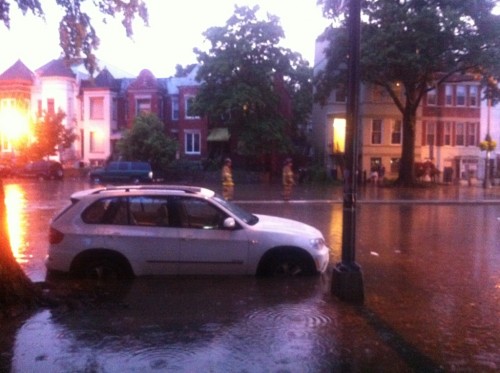 “A year ago this month the Mayor’s Task Force on the Prevention of Flooding in Bloomingdale and LeDroit Park announced a series of short-term relief measures to lessen the impacts of flooding in these neighborhoods. Since then, the District Department of Transportation (DDOT) and DC Water have aggressively implemented several of these immediate efforts to mitigate the flooding as part of the District’s approximately $3 billion infrastructure improvement program.

This past spring DDOT installed catch basins (i.e., storm drains) on the 500 and 600 blocks of Florida Avenue NW and the unit block of T Street NW to help divert water from area roadways and alleviate flooding. DDOT also installed a new sewer line and double catch basin at the intersection of 2nd Street and Rhode Island Avenue NW to add capacity to the sewer system.

In early July DDOT also completed a major step in an ongoing project — the installation of a five-foot-wide storm sewer line under the median of the 100 block of Rhode Island Avenue NW to help remove stormwater from the roadway and store it before slowly releasing it into the sewer system. The storm sewer was originally slated to be completed by Labor Day, but was completed in early July — two months ahead of schedule.

“Mother Nature wasn’t going to wait around for us to get the job done, so we made great strides to complete this ahead of schedule and prepare the community for potentially damaging summer storms,” Mayor Gray said.

DC Water has begun construction of a project to divert stormwater into a storage tank at the McMillan Sand Filtration Site. Crews have dug down to the existing sewer line under North Capitol Street and are working to connect it to the underground cell at the northeast corner of the McMillan site. This project is just one facet of the $2.6 billion Clean Rivers Project to build large storage tunnels for storm runoff from Blue Plains all the way up to flood-prone neighborhoods.

The McMillan site will only be used to hold stormwater, and for that reason DC Water has had to modify its previous plan to use a second cell near 1st Street for flood mitigation. An investigation upstream found that the private sewer lines coming from the Washington Hospital Center and the Old Soldiers’ Home contain combined stormwater and sewage.

With the addition of multiple bioretention cells along Irving Street NW, DC Water expects to have approximately 4 million gallons of storage available for flood relief in spring 2014, with another 8 million gallons to be added 2 years later with the completion of the 1st Street Tunnel. The tunnel will hold stormwater during intense rainstorms, after which a temporary pumping station will deliver the stormwater up into the sewer system to be treated at Blue Plains. DC Water is starting pre-construction surveys of homes, and construction of the First Street Tunnel is expected to begin in October.

“Our commitment to solving decades-old infrastructure problems is absolute,” said City Administrator Allen Y. Lew. “Due to the hard work and cooperation of DC Water and DDOT, we are making swift progress that is already lessening the neighborhood’s impact from heavy rainstorms and associated flooding. The Mayor’s charge was clear – and, as we noted when the task force’s findings were released — we will complete the full infrastructure improvements several years earlier than originally projected.”

DDOT plans to make other critical improvements in the area over the next several months to mitigate stormwater runoff. This fall DDOT will restore the alley near 1st Street NW with permeable pavement, a more porous material that will help reduce stormwater runoff in the area. DDOT will also install a bioretention cell (i.e., rain garden) in the green space at the intersection of T Street and Rhode Island Avenue NW. An inlet will be placed in the rain garden to capture runoff from large storm events and carefully release it into the sewer system.

DDOT will also invest $10 million over the next five years in green infrastructure stormwater solutions in this area and areas immediately upstream. Some of these improvements include installing more permeable paving and rain gardens to capture and redirect stormwater.

Residents of Bloomingdale and LeDroit Park can also take steps to protect their property from flooding. DC Water offers rebates to defray the cost of installing backwater valves. For more information, visit www.dcwater.com/bloomingdale. The District Department of the Environment (DDOE) also offers rain barrels to qualifying property owners. Learn more about that program at ddoe.dc.gov/riversmarthomes.”