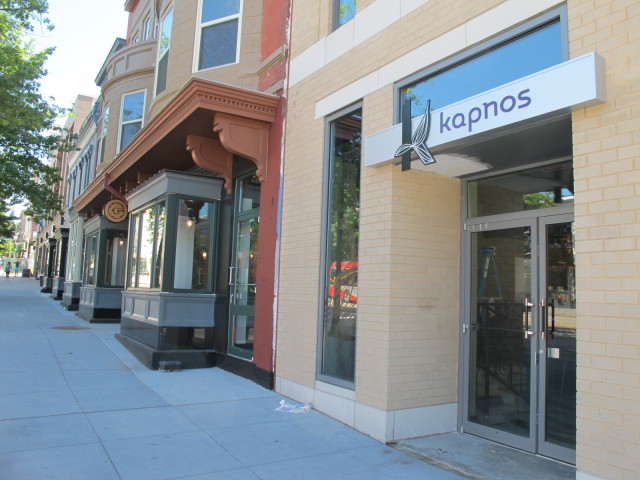 “Top Chef All-Stars Runner-Up, Mike Isabella, announces plans to open a new Greek restaurant in the 4,700 square foot space at 4000 Wilson Blvd. in the Ballston neighborhood of Arlington, VA. Kapnos Taverna, set to open in summer 2014, is a sister restaurant to Kapnos, Isabella’s Northern Greek-inspired restaurant, which opened on the 14th Street Corridor just two months ago in early July.

“Guests have been asking me to build a restaurant in Virginia or Maryland since we opened Graffiato in 2011. Kapnos has been wildly popular in its first few months, and we think this sister concept will be a great addition to the booming neighborhoods in Arlington,” said chef/owner Mike Isabella. “Next spring, our team will travel to Greece, and we plan to build the menu around reinterpretations of regional cuisine.”

Isabella’s team plans to showcase their dishes from the Cyclades, Peloponnese, Thessaloniki, Ionian Islands and Crete. While the Kapnos Taverna menu will include some dishes from the original Kapnos, there will be some noticeable differences, including the addition of weekday lunch, weekend brunch and a happy hour menu. Kapnos Taverna will have one rotating spit, instead of two, to roast whole chickens, lamb and pork shoulders.

The bar program will include up to 10 cocktails on tap and the largest wine program in Isabella’s family of restaurants. More than 200 bottles will be displayed in a two-story glass enclosed case built to stretch from the first floor to the mezzanine. The 185-seat restaurant will also feature a 40-seat seasonal outdoor patio.”