Two more retail tenants have been announced and plan to open soon in the Boilermaker Shops at The Yards according to the project’s master developer and owner, Forest City Washington. The latest leases signed are for a Spanish-based mini- sandwich chain which is new to the DC area known as 100 Montaditos, as well as a familiar name in living well, GNC, the leading global specialty retailer of health and wellness products.

100 Montaditos an internationally known fast casual restaurant that specializes in “montaditos,” or mini sandwiches and offers 100 varieties of fillings, will open this fall in the Boilermaker Shops, an adaptive reuse of a former Navy Yard industrial building which is fast becoming the retail heart of this new and developing urban waterfront neighborhood being created in DC’s Capitol Riverfront area. In a similar timeframe, GNC is planning to open its latest DC location just a few doors away.

Founded in Spain in 2000 and now with over 250 restaurants across the globe, including in selected US markets, 100 Montaditos is the latest retail/dining option to be announced for The Yards. 100 Montaditos prides itself on being a place to enjoy a delicious slice of Spanish cuisine and culture in a relaxing and friendly environment. Inspired by the atmosphere of a typical Spanish tavern, the menu offers a variety of traditional montaditos served on crunchy, freshly-baked Spanish rolls; filled with such typical Mediterranean ingredients as Serrano ham, Spanish tortilla, chorizo sausage and Manchego cheese; and seasoned with such traditional Mediterranean ingredients as olive oil, garlic, onions, lemon, tomato sauce and ali oli. As its name implies, 100 varieties of fillings are available on a choice of rolls. There are multiple 100 Montaditos locations in Florida, in the Miami area, as well as in Orlando and Key West. Other U.S. locations are New York City and Iowa.

Opening over the next few months in the Boilermaker Shops are several previously announced retailers and places to eat. The DC-based Neighborhood Restaurant Group (NRG) is expected to soon open two of their food/drink concepts there. Bluejacket will be a working micro-brewery which, in addition to an impressive selection of craft beers, will also offer a menu of pub-style food. NRG’s popular Buzz Bakery and coffee shop will open at approximately the same time in an adjacent unit. 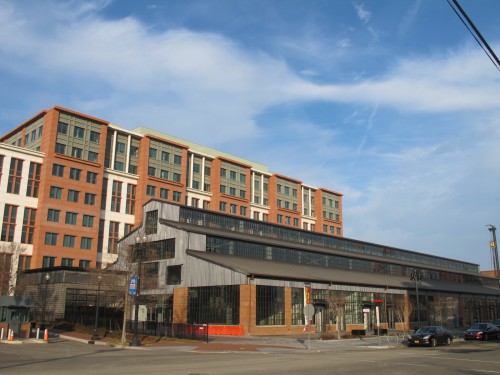