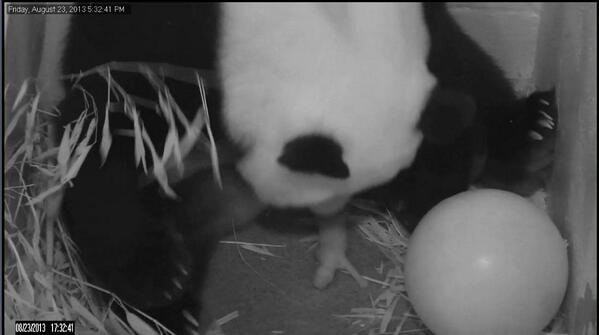 “Giant panda Mei Xiang gave birth to a cub at the Smithsonian’s National Zoo 5:32 p.m. The panda team heard the cub vocalize and glimpsed the cub for the first time briefly immediately after the birth. Mei Xiang picked the cub up immediately and began cradling and caring for it.

Behavior watchers have been monitoring her 24 hours a day since Aug. 7 via the panda cams. The panda team began preparing for a birth when they saw her water break around 3:36 p.m. and she began having contractions. Mei Xiang started spending extended amounts of time body licking and cradling her toys Aug. 11, all signs that she could give birth.

For the first time this year scientists used another test developed by the Memphis Zoo which analyzed Mei Xiang’s levels of prostaglandin metabolite (a fatty acid) to narrow the window when she would give birth or experience a pseudopregnancy. Scientists at the Memphis Zoo performed the analysis and determined that if Mei Xiang were pregnant she would likely give birth during the last week of August. If she were not, her pseudopregnancy would have likely ended in early September.

“I’m glued to the new panda cams and thrilled to hear the squeals, which appear healthy, of our newborn cub,” said Dennis Kelly, director of the Smithsonian’s National Zoo. “Our expansive panda team has worked tirelessly analyzing hormones and behavior since March, and as a result of their expertise and our collaboration with scientists from around the world we are celebrating this birth.”

Read more →
More Stories
50th Anniversary of the March on Washington DC Rally this SaturdayAssault with Brick at 13th and U St, NW; Stabbing at 16th and Columbia Rd, NW