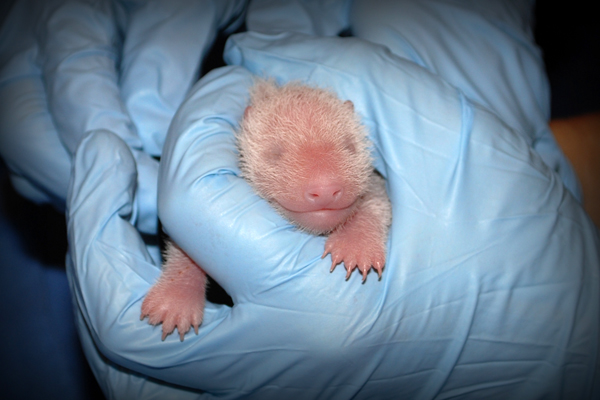 Update on the Giant Panda cub from the National Zoo:

“This morning [Sunday], the panda team was able to give the cub its first neonatal exam. The cub is robust, fully formed, and is a bright, healthy shade of pink. It weighs 137 grams, which is about 4.8 ounces. Its heart rate is steady, and vets were able to hear breathing sounds from both lungs. It’s belly was nice and full, its mouth was normal, and it was obvious that the cub is both nursing and digesting. All signs are that we have a very healthy, active, vibrant cub.

We won’t know the cub’s sex or its paternity for two or three weeks.

At 7:29 p.m. yesterday evening, Mei Xiang gave birth to a second, stillborn cub. Keepers watching Mei on the panda cam saw her groom it for 17 minutes. When she stopped grooming, it fell from Mei’s body onto the floor of the den. It lay motionless and made no sound. Throughout, staff could see the first cub and hear it squealing. Mei never set it down. Staff retrieved the motionless cub with a grabbing device. It was immediately evident that the cub had developmental abnormalities and wasn’t fully formed. It was never alive. Mei’s first cub continues to do well.”