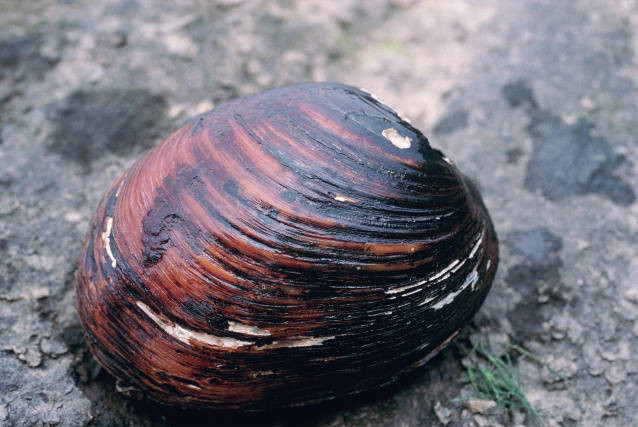 Photo by: Craig Stihler/USFWS via wikipedia.

Think of mussels and your mind likely turns to the white wine and lemongrass variety. But North America has a rich array of native freshwater mussel species: some 300 of them, a third of the global total. Freshwater mussels look more like clams than their marine cousins, and range from one to ten inches long, in a variety of colors reflected in their wonderful common names: Purple Bankclimber, Shinyrayed Pocketbook, Yellow Lampmussel, Pink Mucket. The endangered Dwarf Wedge Mussel lives in Rock Creek. Some species of mussel can live to over 100 years old.

Like other bivalves, freshwater mussels are filter feeders, and a single animal can filter up to eight gallons of water a day, recycling nutrients and cleaning it of particulate matter. Mussel biomass can be extremely high, making them a largely unseen but vital part of a functioning river system. In many places, however, their numbers have been dramatically reduced through a combination of pollution and sedimentation, invasive species like the exotic zebra mussel, and dams. That last factor might not make sense at first – mussels are basically sedentary, after all. But unlike marine mussels, the freshwater variety has a complicated life cycle involving a larval stint spent hitchhiking on fish. Some mussels are highly selective in their choice of host, meaning they can’t reproduce at all if that particular fish species has been fished out or blocked from their spawning site by a new dam.

If a host fish is available, mussel larvae will attach themselves to its gills, traveling there for several weeks before dropping off to colonize other parts of the river. Their methods of attachment are the fun part. Some freshwater mussel species’ larvae form into assemblages that look amazingly like minnows or crustaceans, complete with dark ‘eye’ spots. When a fish bites into this mock meal, the assemblage breaks apart and individual larvae attach themselves to their host’s gills with tiny hooks. This service is repaid later, as the adult mussels clean the waterways the fish depend on.

Historically, freshwater mussels were intensively overharvested to fuel first the freshwater pearl boom of the 1800s and then an entire industry built on mother-of-pearl buttons made from the nacreous inside of mussel shells. By the turn of the century, millions of buttons were being made each year in factories along Midwestern rivers and their mussel beds. These pressures contributed to 35 of our native species going extinct; 75 percent of the remaining ones are considered threatened or endangered. As a result, most of the ones you’ll ever encounter are protected, but you can see their shells gracing the banks of the Potomac and even the C+O Canal.

This will be the last installment of Urban Wilds. Thanks for reading!