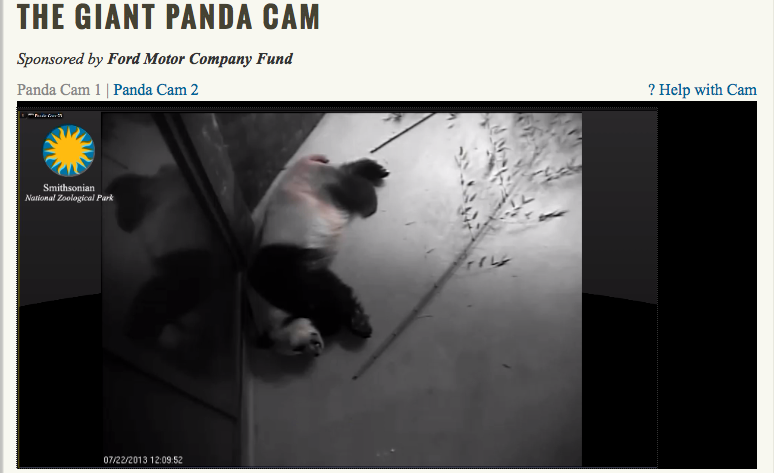 Giant panda fans can tune into the panda cams, sponsored by the Ford Motor Company Fund, at the Smithsonian’s National Zoo once again. The cams went dark for upgrades May 30 but will begin streaming live uninterrupted video today at noon.

The panda cam system upgrades were designed to maximize the viewer experience. Cam watchers can now stream live video of Mei Xiang and Tian Tian on any computer, tablet or mobile device without having to refresh the web page. Mei Xiang’s den cameras have also been upgraded to high-definition cameras. Panda fans the world-over can watch her more clearly than ever before as she builds her nest.

The Zoo’s panda team conducts behavior research using the panda cams, and remotely watch both bears. They will monitor Mei’s behavior especially closely after it has detected a secondary rise in her urinary progesterone. That rise will indicate the end of the breeding season is near, and she will experience a pseudopregnancy or give birth within 40 to 50 days. During that time she will spend increasingly more time in her den, and the panda cams will be the primary way for the panda team and panda fans alike to watch her.

Veterinarians are conducting ultrasounds regularly as Mei Xiang chooses to participate in them, to monitor changes in her reproductive tract and evaluate for evidence of a fetus. Giant panda fetuses do not start developing until the final weeks of gestation, making it difficult to definitively determine if there is a pregnancy. It is still too early to detect a fetus. But you can watch a video of Mei’s ultrasound from July 3.

Visitors to the David M. Rubenstein Family Giant Panda Habitat will see the renovated panda cam station with new larger flat screen monitors in addition to the pandas. Both pandas are on exhibit as usual today. Mei Xiang will receive a special panda-friendly frozen fruit cake today at 1:30 p.m. to celebrate her 15th birthday. Tian will turn 16 years old next month.