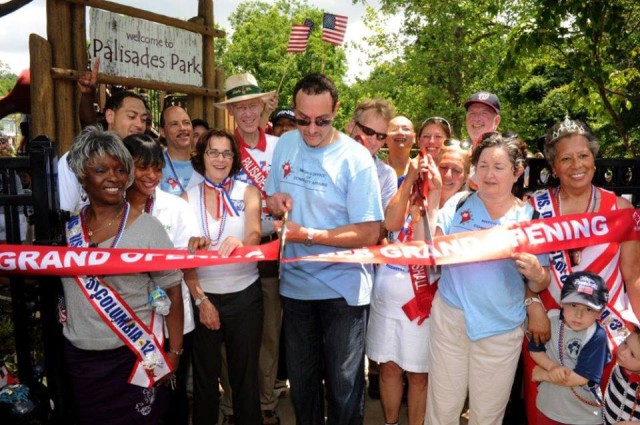 Mayor Vincent C. Gray, Councilmembers, government officials, the Palisades Citizens’ Association, the Friends of Palisades Recreation Center and the Palisades community cut the ribbon on the newly renovated Palisades Playground (5200 Sherrier Place NW). The ribbon-cutting was held at the conclusion of the Palisades 47th Annual July 4th Parade & Picnic. This parade is known as the “largest small town parade in D.C.” Palisades is the District’s third playground to be completed under Mayor Gray’s Play DC Playground Improvement Project, managed by the District’s Department of Parks and Recreation (DPR) and Department of General Services (DGS).

“Palisades Playground is not only the District’s first ‘imagination playground,’ but it is representative of the rich Native American history that exists in the Palisades community,” said Mayor Gray. “One of the main goals of my One City Action Plan is to improve every resident’s quality of life, providing safe and inviting places for our children to play. The renovations and upgrades here at Palisades Playground are an investment in our children, our families, our community and our great city.”

By definition, Palisades means “fortification consisting of a strong fence made of stakes driven into the ground.” Native Americans once used this area as one of their villages as they traveled along the Potomac. Palisades Playground is the District’s first imagination play space, which means that there is movable play equipment, including building blocks, and it has state-of-the-art materials for the play surfaces.

“DPR is pleased with the progress and initial outcome of the Play DC project thus far, as we begin to cut the ribbon on the Play DC playgrounds city-wide. This has been a very multi-layered, aggressive effort that has included input from the residents in the playground communities, as well as collaborative efforts from DPR, DGS, the D.C. Office of Planning (OP) and the District Department of the Environment (DDOE),” said DPR Director Jesus Aguirre. “Play is a fundamental aspect of growth and development for children and youth, and a positive exercise experience leads to avoidance of weight gain, higher self-esteem and reduction of risk factors for disease.”

Palisades Playground is the first Play DC playground to be completed in Ward 3, features various components for the entire family, and is based on a unique concept. Its theme is based on learning about the history of the area through play equipment and designs that feature Native American symbols and themes. The play-sized Potomac River, which is designed into the surfacing, flows through a tot play space, along with a play space for children ages 6 – 12. In addition, the play space features an expanded community garden area (the garden was made possible through a Sustainable DC grant from OP and DDOE), a new shade structure, a new spray feature, outdoor fitness equipment, the District’s first skate spot, new landscaping and more.

Play DC has been a city-wide effort from the very start, leveraging the expertise of organizations including DDOE, OP, various other District agencies, local community groups and District residents. DPR currently operates 78 playgrounds. Rosedale Playground and Volta Park Playground were the first two Play DC playspaces to be completed. All 32 playgrounds are slated to be complete in Fiscal Year 2013.