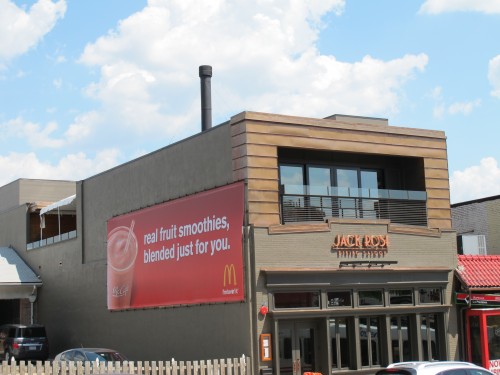 “It’s a Brewery! Celebrating the “rebirth” of San Francisco-based Shmaltz Brewing Co., DC’s Jack Rose Dining Saloon is christening the brewery’s new NYC home with a rooftop tap takeover party hosted by Shmaltz brewmaster himself, Jeremy Cowan, on Saturday, July 20 at 2PM. The alfresco celebration will feature 24 Shmaltz brews on draft, from the cask and in rare vintage bottles – including the limited-release Death of a Contract Brewer IPA – as well as celebratory cigars, creative deli fare and an afternoon of beer and shower-themed games like baby bottle bowling and beer bingo.

“Born” in San Francisco in 1996, Shmaltz is being “rebirthed” now in 2013 with its new 20,000-square-foot, 50-barrel brewing home in Clifton Park, NY. With the help of Jack Rose beer director Nahem Simon, Shmaltz is taking over the rooftop’s tap handles with brews from its loved He’Brew and Coney Island Lagers lines as well as launching the uber-rare, exclusive Death of a Contract Brewer Commemorative Black IPA, making Jack Rose the only place outside of NYC to taste this celebratory limited-release brew.

Since 18 is a sacred number in the Jewish tradition, Jack Rose will be featuring 18 award-winning Shmaltz beers on draft and cask, including the first keg of Death of a Contract Brewer Commemorative Black IPA to make it outside of NYC

There will also be six incredibly rare vintage bottles available to try:

Jack Rose’s “It’s a Brewery!” Party is free and open to the public.