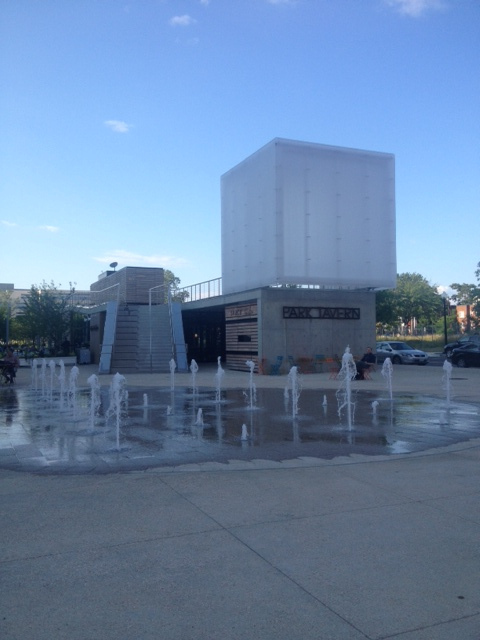 This edition of Eating Around Town was written by Abbey Becker. Abbey previously wrote about Little Serow. She lives near Eastern Market.

If you hang out on Capitol Hill, you’ve probably eaten (or drank) at one of the restaurants Xavier Cervera used to own—Boxcar Tavern, Hawk ‘N’ Dove, Pacifico, etc. Before selling his empire to a Boston equity firm a couple of months ago, he started work on Park Tavern (202 M Street SE), a more upscale option for Nationals game goers and residents of the Capitol Riverfront neighborhood.

Even though he’s no longer an owner, Park Tavern still maintains the hallmarks of a Cervera restaurant—mediocrity.

Before some of you get upset, I’m sure his restaurants have their place. I’ve heard Pacifico makes a good margarita, and Molly Malone’s and Lola’s are perfectly acceptable bars on Barracks Row.

But living in a city, and with so many quality options that are easily accessible, it’s hard to make a winning case for Park Tavern, at least.

If you’re going to a Nationals game and you don’t want to face the throngs at Gordon Biersch, Justin’s Café, or The Bullpen, then Park Tavern is probably a good choice. They have what sounds like a creative cocktail menu and they offer a fair number of wine and beer selections. They’re a few blocks away from the main action by the park, so it’s likely quieter around gametime. They have a large outdoor patio where the skating rink is located in the winter that either looks out onto the play fountain or the new park, and it’s a pleasant place for a drink on a warm evening.

But if you’re looking for a great dining experience, or even a meal that’s better than something you could likely make at home, Park Tavern should not be at the top of your list.

I went with an old friend and her boyfriend, so we ordered a couple of dishes. I was feeling like a burger, and if you can make a good burger, I’m inclined to come back.

Unfortunately, their burger isn’t very good. I asked for it medium rare. I never mind if it comes out medium, but when it comes out well done, it’s a disappointment, which was the case here. It was surprisingly juicy, but it was otherwise unremarkable. I kept eating the fries, but I think it was because I was hungry. These were clearly frozen beforehand, which doesn’t ultimately doom a fry. But they were underseasoned and not real crispy.

The pastrami sandwich and blue cheese and pear pizza were received pretty much the same way—I’ll eat some of it, but I won’t order it again, and I’ll probably eat something else when I get home.

Overall, Park Tavern is a fine place for a beer and a snack before or after the game. I would absolutely go back for happy hour to sit on the patio. I’ll make my burger at home afterward, though.