And now an update from the The Washington Humane Society:

“Earlier today, the Washington Humane Society (WHS) reported that WHS Animal Care and Control Officers, in partnership with the District of Columbia Department of Health (DC DOH) and the Metropolitan Police Department (MPD), successfully tranquilized and trapped a black bear spotted near the intersection of 49th Street and Glenbrook Road, NW.

WHS received a call early this morning reporting the black bear sighting. WHS Officers immediately responded to the scene where MPD Officers had surrounded the area they believed the bear to be hiding.

The bear appeared frightened and proceeded to run through the backyards of many residential homes in the area. WHS Animal Care and Control Officers followed close behind, and after an approximately two hour chase, WHS Officer Peter Martel was able to get a clear view of the bear and darted him with a tranquilizer. Once hit, the bear ran a short distance and was recovered safe and sound in the backyard of a nearby residence.

The bear was evaluated and determined to be healthy. With the assistance of the Maryland Department of Natural Resources and DC DOH, the black bear was transported to the wilderness in the western part of Montgomery County, MD and released.

In general, black bears pose no threat to the public. If you spot a black bear in the District, do not approach, call DC Animal Care and Control (202-576-6664).” 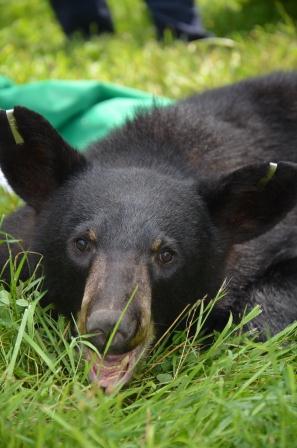