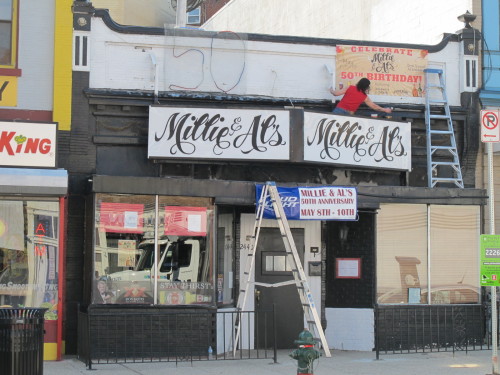 Before it was Adams Morgan, the 18th St and Columbia Road NW area was home for many well-known clubs including the famous Showboat, where top entertainment performed. Many well known businesses got their start on 18th street : The first Toys R Us, the first Peoples Drug and Dart Drug Stores and Gartenhaus Furs.

Al Shapiro spent much of his time in the neighborhood and was a regular at one of the local 18th restaurants called Ballance’s Columbian Restaurant, nicknamed Bobbies. Once he learned his favorite restaurant was for sale, he jumped on it, and renamed it Millie and Al’s. Millie was Al’s girlfriend who bartended and had a great steady following.

In 60’s patrons could fill the bar from 8:30 am til the wee hours bringing a new meaning to the word, Regulars. Many sat at the bar the same time everyday and the only way they gave up their permanent bar stool was after passing away.

In the early days of Millie and Al’s, a group from the neighborhood car dealership came in everyday after work and sat at the same booth. The manager, who was part of this group died and as a Memorial gesture they brought the horse picture from his office in and placed it above their booth in his honor. Soon after the managers death, a new manager was assigned the position in the same office. He learned of the picture being moved from the office and went to Al to request that the picture be returned. There was no doing by Al, the boys brought it in honor of their friend, who died, and it would remain there . This picture still remains in the same place and has never been damaged or tampered with.

Al existed through so many neighborhood transitions, including some really bad times. Not many would have endured these changes and stayed. This area once had the nickname “Little Harlem”. You could not walk the sidewalks as a pedestrian without fear. Not long after the riots a little Havana was born with crime to match. These were ruff gangsters that could drink until they were blinded. If it was last call and the bar was closing, Al would describe these guys not wanting to leave a drop of beer, so they would chug the remains until it would seem to come out of their ears.

Al was not a very tall or bulky man, but many watched him literally jump up to hit or throw one of these gangster or punks out. They did not resist, whether it was respect or fear, but Al won. He never really boasted in this victory; it was Al defending his turf.

There were riots, gangsters, thugs, and then suddenly there were Yuppies. All the bad` paid off for the good times in Adams Morgan. Soon to explode to an area not duplicated or matched, diversity all the way.

As the neighborhood progressed less violence was occurring and the various cultures were uniting, thus Adams Morgan Day was born. A yearly event that has continued for over 35 years.

2013 marks the 50th year for Millie and Als, a true landmark to Adams Morgan.

The arrival of Yuppie era started a wave of restaurants, bars, and businesses to open so rapid that a Moratorium to new liquor licenses started. Millie and Al’s once a lone bar in a neighborhood with few other businesses was now surrounded by bars, restaurants and clubs. Competition or not, MA maintained its business and it increased its loyal Regulars.

The crowds grew as well as the bathroom lines. More and more couples hooked up and many getting married. There is a large unknown amount of couples that owe their partnership to MA’s: A traveling couple in China bumped into another couple wearing a MA t-shirt and reminisced over meeting at MA.

A young couple on a motorcycle stopped to help a woman with a flat tire on a hot summer day in Minneapolis. Conversation revealed that the couple met at MA and were visiting Minneapolis to announce their engagement to their parents and the misfortunate woman with flat was best friends with the owner of MA.

A couple visiting opening day at a new restaurant were introduced to the owners when they realized they all met at MA’s. Chances are someone you know met their spouse or partner at MA’s, as one of their t-shirts quotes “I met Your Mother at Millie & Al’s”. 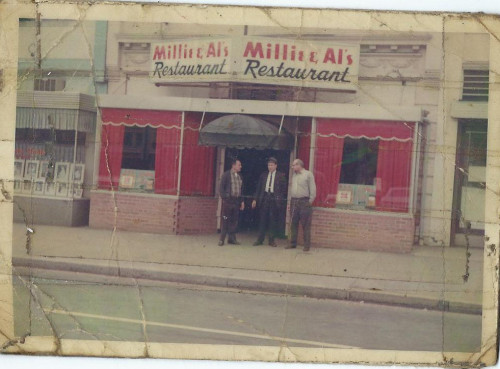 END_OF_DOCUMENT_TOKEN_TO_BE_REPLACED

More Stories
Crossroads Restaurant Will Feature a cascading waterfall and 5-ft, 500-lb Buddha statue and promises “a culinary tour around the world”Del Campo from Chef Victor Albisu Close to Opening in Penn Quarter/Chinatown