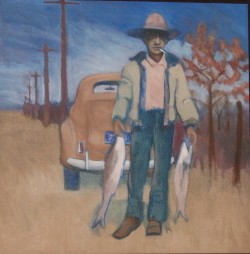 Born in dust-bowl Oklahoma in 1933, John Sapp began to take delight in shapes, lines, and color as a tiny boy. At the start of first grade, he was sent by his parents to Grandpa Sapp’s grain and livestock farm in the Oklahoma panhandle, and there he drew pictures between his chores and attending the local grade-school where his Uncle Otis was principal.

His mother, a local actress and author with an abiding interest in art, insisted he visit each exhibit that came through town. His high school art teacher tried to steer him to the Chicago Art Institute, but Sapp was too obstinate to have others tell him how to do things and opted not to go. He preferred to teach himself, a method he employs to this day, when at 79 he learns and practices flamenco guitar alone.

Sapp studied architecture and mathematics and later became a Navy pilot, a government bureaucrat, a stockbroker, musician, cook, and father, all the while drawing and painting in corner studios he created at home. The goats, cows, horses, and dogs of his Midwest childhood show up in his work decades later, even after his life has taken him to the reaches of North Carolina, San Francisco, Bangkok, San Salvador, Genoa, Andaluca, and Paris.

As far as Im concerned, art speaks for itself, and who I am as the maker of it has damn little to do with it, says Sapp. It is evident in his paintings, however, that the spirit of the maker is in fact wholly present, in the portraits of his beloved grandfather, the Oklahoma landscape of his childhood, and the accidental paint spills that become expressive images themselves a process that seems to reflect Sapps meandering life course.