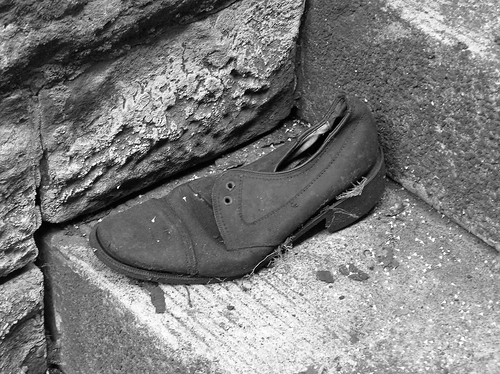 When I first saw this post on New Columbia Heights about someone finding a headless rooster on the sidewalk, my first thoughts were:

(b) How noteworthy is finding a dead fowl on the sidewalk?

But to sidebar for a moment…

The writers assumption was that the rooster lost its nut as part of a Santeria ritual (which is different than a Sangria ritual, where you would just get drunk with the rooster, then maybe run with a bull together, but definitely no beheading).

This makes sense. I mean, outside of fearing that your neighborhood was suddenly infested by vampire chickens, why else would you cut the head off of a rooster and leave it laying on the sidewalk? (Hey, if they can make a movie about vampire dogs–why not vampire poultry?)

I’m curious what is the most unusual thing you’ve ever found/come across on a sidewalk? I’m sure you have some great stories on this.

My “most unusual thing on a sidewalk” is actually kinda lame. I am constantly perplexed when I find single shoes on the street–and this happens all the time. How can someone lose a single shoe? Wouldn’t you notice that, like, right away?

I realized how lame this observation was when I once shared it with a friend, who immediately reminded me:

(a) that one time a man defecated on the sidewalk next to me, so I guess what he left behind was a little odd to see on a sidewalk, and
(b) that he himself had once found a prosthetic human leg laying in the middle of a sidewalk.

So tell me–what’s your best story about finding some strange thing on the sidewalk?